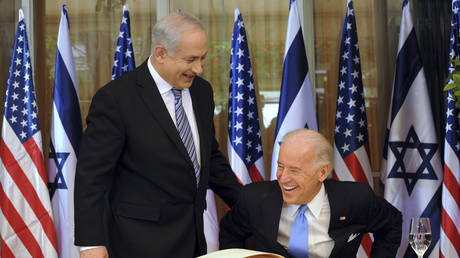 An unearthed clip of Joe Biden explaining that if there was no Israel, the “US would have to invent an Israel to protect our interests” has been met with angry reactions on social media.

The video, filmed in Congress in 1986 shows a then-senator Biden explaining how important Israel is to the US in fairly blunt and illuminating terms.

The former vice president to Barack Obama and possible presidential candidate in 2020 starts by saying people should stop apologizing for their support for Israel. “There is no apology to be made, none,” he shouts. “It is the best $3 billion investment we make.”

In 1986, Joe Biden said if Israel didn’t exist, the U.S. would have to invent an Israel to protect U.S. interests pic.twitter.com/McOYXJteMF

And he wants to be potus? Those billions would be better spent improving the lives of ordinary Americans

It wasn’t just in the 1980s that America gave our taxes to Israel and by the way the ROI (Return On Investment) only aligns the pockets of politicians. 🤔 They have free health care over there but Americans can’t afford health care for ailing parents, sick kids, pre-existing ails pic.twitter.com/CQHGdok6YS

“Were there not an Israel, the US would have to invent an Israel to protect our interests in the region,” he continues.

This statement should disqualify you to be the next POTUS. We need policy that reflect the will of its citizens.

Damn he just straight up said the quiet part loud

As Noam Chomsky says, we need a nuclear outpost sitting on the world’s biggest oil reserves.

“Were there not an Israel, the US would have to invent an Israel to protect our interests in the region”

An outright admission that “Israel” is an extension of the US’ empire. Is cleansing Palestinians one of America’s interests? pic.twitter.com/P6s2xLEutQ

The US has long highlighted the importance of its relationship with Israel, the “only democracy in the Middle East,” but Biden’s explanation lays out just how strategic that connection is. Essentially, Biden is saying that the US uses Israel as a tool to wield influence in the Middle East.

@JoeBiden
“Were there not a Palestine, Syria, Iran, Lebanon… Israel would have to invent an “enemy” to make America go to war for them in the region”

Joe Biden bragged that no senator had done more fundraisers for AIPAC than him pic.twitter.com/ZPdek3TizQ

The US gives Israel $3.1 billion a year in military aid, and it is the biggest recipient of both US aid and military equipment. The US and Israel conduct joint military operations, and the US has stockpiled military equipment in Israel. The US Navy’s Sixth Fleet uses the Israeli port of Haifa as its main port of call in the eastern Mediterranean. In 2017, it opened its first official permanent military base in the country.

Some Twitter commenters questioned Biden’s logic, suggesting that it’s really Israel that has influence over US government because of the power the Israel lobby holds over US politicians and the way in which the US defends Israel at the UN and sees its enemies, such as Iran, as its own.

All the contrary joe !!! In order for Israel to protect its interest they bought most American politicians in order to control America and enslave it’s people and get taxpayers money on a regular basis and make America do Wars for Israel. America is the puppet and Israel owns it

Many people think that Israel controls US policy in the ME.

Trump is openly helping an embattled Bibi win the election. Certainly not to help the Israeli people!

Others claimed that the US and the UK technically already had ‘invented’ Israel, referring to the US support for the 1917 UK Balfour declaration which set out plans for a Jewish home in Palestine, and the fact that the US was the first to recognize the state of Israel in 1848.

the US did invent what we refer to as “Israel” (State of), after WWII, along with a few allies.

The United States did invent Israel. Britain helped. Not sure about his assessment of its monetary virtue. It could cost us everything.

Not all reactions were focused on Biden’s words, though, as many were distracted by how little hair he had 32 years ago compared to today.

Must have been shortly after this that he got the hair plugs.

@Cole_don17 ok I’ll be the one to say it. How did this man bring back his hairline and how can we get the technology to @blakeroberts_10