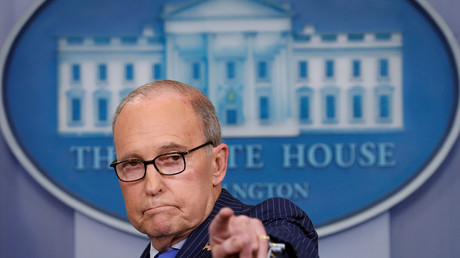 Donald Trump’s chief economic adviser Larry Kudlow has accused the Canadian Prime Minister Justin Trudeau of ‘stabbing the US in the back’ with his comments at the G7 summit. Kudlow’s comments have come under fire on social media.

Appearing on CNN’s ‘State of the Union’ Sunday, Kudlow characterized Trudeau’s post-G7 news conference, in which he promised to “move forward with retaliatory measures” to counter US tariffs on steel and aluminum imports from Canada, the European Union and Mexico, as a “betrayal.”

“He really kind of stabbed us in the back,” Kudlow told host Jake Tapper. “He did a great disservice to the whole G7.”

Kudlow said the president was merely flexing his muscles ahead of the summit with North Korean leader Kim Jong-un in Singapore on Tuesday. “The president is not going to let a Canadian prime minister push him around on the eve of this. He is not going to permit any show of weakness on the trip to negotiate with North Korea,” Kudlow said. “Kim must not see American weakness.”

On @jaketapper Larry Kudlow basically just said Trump was mad that Justin Trudeau disagreed with him publicly. “It was a betrayal.” This does not bode well for North Korea negotiations.

Some commentators saw Kudlow’s comments as a sign of the Trump administration’s bullying tactics, while others accused the economic guru of showing the type of hypersensitivity normally reserved for the right’s political enemies.

So Larry Kudlow thinks it’s okay for Trump to make baseless threats against Canada, Mexico and the European Union, but if any of those countries stand up and defend themselves that’s a “betrayal.” This is classic bully behavior. https://t.co/5cKLnZx3Om

Am watching @cnnsotu with horror from Australia. Who the heck is Larry Kudlow and who thought is was a good idea for him to represent anything other than a used car emporium? These are not your best people

Interesting statecraft:
Larry Kudlow on @CNNSotu insists President Trump is a victim of PM Trudeau’s “betrayal,” and goes on to label Kim Jong Un a “crazy nuclear tyrant” as the Singapore summit is set to begin.

Interesting statecraft:
Larry Kudlow on @CNNSotu insists President Trump is a victim of PM Trudeau’s “betrayal,” and goes on to label Kim Jong Un a “crazy nuclear tyrant” as the Singapore summit is set to begin.

READ MORE: Obama to blame for Crimea fallout, some want Russia back in G8 – Trump

Trump took to Twitter Saturday night to attack Trudeau, accusing the Canadian leader of being “very dishonest and weak” in their negotiations at the summit. Trump followed up by saying the US would not endorse the G7 communique, a statement on the shared priorities of the Western allies.

PM Justin Trudeau of Canada acted so meek and mild during our @G7 meetings only to give a news conference after I left saying that, “US Tariffs were kind of insulting” and he “will not be pushed around.” Very dishonest & weak. Our Tariffs are in response to his of 270% on dairy!

Trump’s decision to not endorse the communique of his allies has drawn criticism from within his own party, with Republican Senator John McCain (R-Arz) taking to Twitter to send a message of support to his country’s Western allies.

To our allies: bipartisan majorities of Americans remain pro-free trade, pro-globalization & supportive of alliances based on 70 years of shared values. Americans stand with you, even if our president doesn’t.