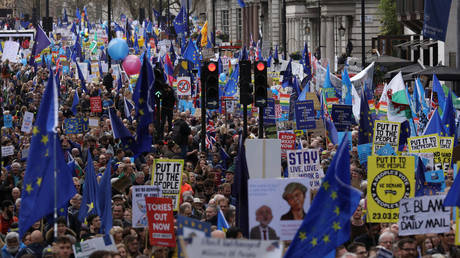 A reported one million people took to the streets of London today to push for a second Brexit referendum, with the event bringing out what could be the most extensive and creative collection of placards you’ll see all year.

The march, organized by the People’s Vote campaign, calls for a fresh referendum to end the political deadlock over Brexit and ultimately to reverse current plans for the UK to leave the bloc.

Dubbed “Put It To The People,” its organizers say more than a million people joined the march on Saturday, before finishing with a rally in front of Parliament, putting it on a par with the Stop the [Iraq] War march in 2003 as the biggest in the country’s history, reports the BBC.

The sea of demonstrators was peppered with banners, posters and placards, ranging from the furious to the hilarious. Movie quotes and political puns were in full force across central London as protesters flaunted their creative side.

The Brexit debacle is reaching fever pitch as the original deadline of March 29 has been extended to April 12. Meanwhile, by Saturday morning a petition asking for Britain to just “remain in the EU” has garnered more than four million signatures – making it the most popular petition ever submitted to the Parliament website.

READ MORE: Tusk: ‘Lots of space’ in hell for British MPs who vote against Brexit deal

Among the high-profile figures who participated in today’s rally was London Mayor Sadiq Khan, who warned the crowd about the upcoming “catastrophe.”

“We are now days away from falling off a cliff edge with catastrophic consequences,” Khan said. “It’s time to take this out of the hands of politicians and put it back to the people.”