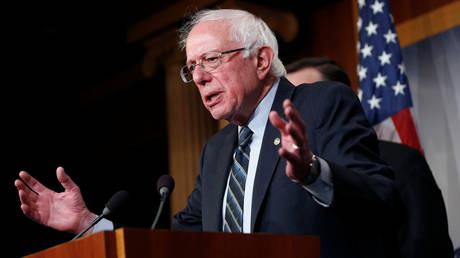 A former adviser to Hillary Clinton suggested that Russia is supporting Bernie Sanders’ presidential campaign, after the popular senator raised a whopping $6 million in the first 24 hours since announcing his 2020 campaign.

Sanders’ impressive first-day fundraising far outpaced that of California senator Kamala Harris, who raised $1.5 million on her first day and who has been billed by the media as the frontrunner in the Democratic primary race.

But the influx of donations to Sanders’ campaign rang alarm bells for former Clinton campaign staffer Adam Parkhomenko, who jumped on Twitter to quip that half of the people donating to the campaign were “named Vladimir.”

The tweet was noticed by journalists including Business Insider politics reporter John Haltiwanger who said linking Sanders campaign to Russian influence was “completely unfounded” and a “serious allegation” to be making in the current political climate.

Parkhomenko was blasted for the tweet, with some saying it was amazing that he seemed to learn no lessons from Clinton’s loss four years ago, but the political operator doubled down, claiming there were “unanswered questions” about Sanders – without clarifying exactly what he meant.

Amazing to see someone so unwilling to recognize and learn from their own mistakes. I guess at some point you start to believe the excuses you made up

So, as a political strategist for HRC, aren’t you the useful idiot that got Trump elected?

Imagine being this out of touch

Russia is already shaping up to be a major talking point among Democrats in the 2020 election. When Harris announced her candidacy earlier this month, her supporters instantly began claiming that her critics were working for the Kremlin.

It’s not the first time Clinton supporters have tried to paint Sanders as a Russian agent. During the 2016 election, many cited the fact that he spent his honeymoon in the Soviet Union as a good reason to be suspicious of his candidacy.