When US embassy staff in Cuba became mysteriously ill after hearing loud piercing sounds, US officials blamed nefarious secret agents for launching “sonic attacks.” But a new Berkeley University study could have proven them wrong.

The incidents, which occurred between 2016 and 2018, saw dozens of US staff at the embassy experience a range of health issues such as nausea, headaches, and vertigo and lead to the removal of the majority of the embassy staff from the island. It also put a freeze on warming relations between Cuba with then-US secretary for State Rex Tillerson “convinced” the attacks were targeted.

But now the theories that the notorious “Havana Syndrome” was the work of some Cold War-era conspiracy have apparently been contradicted by scientist Alexander Stubbs of the University of California, Berkeley, who this week published a study pinpointing the source of the mystery noise. 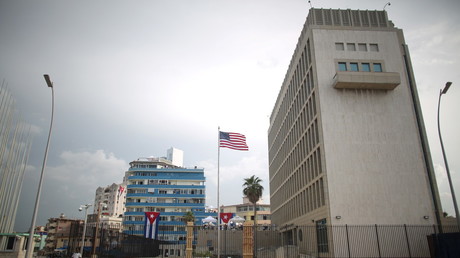 Presenting his findings to the Annual Meeting of the Society for Integrative and Comparative Biology, Stubbs suggests that the noises heard by staff were instead from the echoing call of an insect, the Indies short-tailed cricket.

Notably, the cricket noise theory had already been posited by Cuban scientists in late 2017. Reviewing US evidence and recording their own data, the Cuban team suggested that the noises may have stemmed from the chirp of the Jamaican field cricket, an insect common on the island.

However, this was dismissed by Washington as the short chirp of the Jamaican field cricket did not match the abrasive continuous drone recorded by US personnel in Cuba and released to the public by AP.

By comparing the US recording obtained by AP with the unique acoustic signature of hundreds of insects, Stubbs found several similar to the recording but no perfect match. That was until he realized that US staff probably made the recording indoors, altering the sound of the potential insect as it echoed off the walls.

Rerunning the analysis again after playing the insect calls through indoor speakers, Stubbs found a near-perfect match with the continuous call of the Indies cricket.

While the Indies cricket is not native to Cuba, further testing with bioacoustics experts at the University of Lincoln (UK) found that the frequency of the sound pulses heard at the embassy matched that of the Indies cricket’s sound production.

It remains to be seen whether the discovery will see US staff return to Havana in the near future.


Earlier in December, another study by a team of physicians from the University of Miami and the University of Pittsburgh found that those embassy employees who reported intense pain in their ears after exposure to the sounds were suffering genuine injuries and “not just hysteria.” However, they were unable to point to the origin of the noise.

Speaking to the New York Times, Stubbs said there was still plenty of debate over what physical damage the embassy may staff have suffered. “All I can say fairly definitively is that the AP-released recording is of a cricket, and we think we know what species it is.”