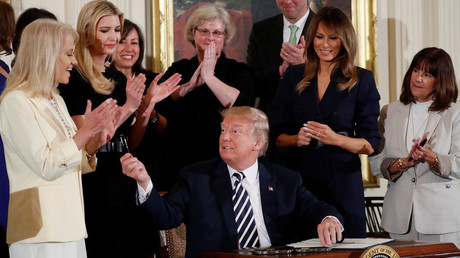 Many US presidents believed their country to be uniquely poised to decide on how the world should work. Donald Trump pushes the misconception further, apparently believing no international agreement can work without America in it.

Trump the deal-maker proved to be a great deal-breaker. Not even halfway past his term, he managed to withdraw from the TTP, a transpacific trade deal aimed at curtailing China’s economic influence in Asia, the Paris Accord, a key agreement on tackling climate change, and now the JCPOA, a security arrangement meant to prevent Iran from acquiring a nuclear weapon.

The dust has not yet settled after Trump last week shove his decision to withdraw from the nuclear deal in the face of European allies, but the US president seems to believe the JCPOA to be a thing of some distant past, an oddity of a glorious American historic record.

“Remember how badly Iran was behaving with the Iran Deal in place. They were trying to take over the Middle East by whatever means necessary. Now, that will not happen!” Trump tweeted on Sunday. “Iran has no respect for world peace. Exiting the Iran Deal was needed.”

Anyone who says a single country is going to “take over” the deeply divided, fractious, contentious and heavily armed Middle East is an ignorant fool, a liar, or both.

Everyone in the deal except the US reassured that they will keep their end of the bargain despite Trump’s move. Everyone, including Iran, so those international inspections and uranium enrichment restrictions are still in place. But for Trump the deal is dead, and to make reality comply with this vision he is even willing to have his senior official threaten European companies with sanctions to back off from doing business in Iran.

There is a certain pattern here actually. The TTP – sans America – is moving forward. In January the 11 remaining signatories said they managed to overcome their differences and are holding the door open for the US, presumably betting on a less protectionist administration eventually taking over. The Paris climate agreement is being kept alive in the US at state level. It’s not that Trump’s policies don’t hurt international agreements he does not like – they are just don’t play make-or-break in many cases.

The US violated the Iran Deal but John Bolton wants to slap sanctions on European countries that DIDN’T violate it. This continues to be the most ass-backward White House ever.

A waning empire does not collapse overnight, and the US still has fingers in many pies, of course. It can cause damage to non-compliers if it chooses to, bashing them through its control of global financial infrastructure, a couple of billions worth of arms secretly funneled to some rebel groups or a barrage or two of Tomahawk missiles. But it hardly makes the US indispensable. It’s time to get used to it.