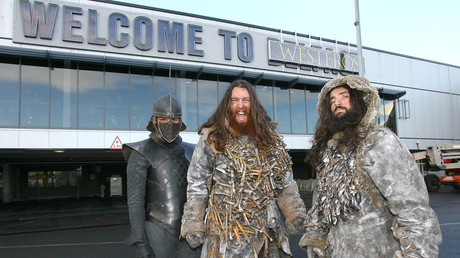 Much like some of the characters in ‘Game of Thrones,’ Belfast International Airport is enduring an identity crisis. This holiday season it’s been renamed Westeros Airport – in honor of the fabled land of fire and ice.

A significant portion of the HBO phenomenon is shot in Northern Ireland. Apparently keen to take advantage of the show’s popularity, and flog a few copies of season seven over Christmas, the airport has teamed up with the show’s creators and Northern Ireland Screen.

The show has given the Northern Irish economy a welcome arrow in the arm, over the last eight years, with GOT tour buses a regular sight. Fans of the show have flocked to the region to walk the king’s road or sit on the iron throne, so this name change, however temporary, was a no brainer for airport officials.

“As the principal airport for Northern Ireland, we look forward to welcoming the hundreds-of-thousands of passengers, as well as meeters and greeters that will be travelling through the terminal over the festive period and will be able to visit Westeros, right here, at Belfast International Airport,”  said Managing Director Graham Keddie.

Just don’t expect to see Daenerys Targaryen landing there on one of her mighty dragons anytime soon.