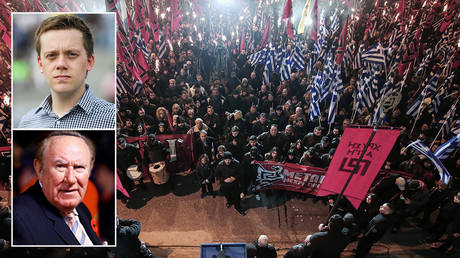 A debate between the BBC’s Andrew Neil and left-wing journalist Owen Jones descended into chaos on Thursday, after the Guardian writer accused the presenter’s Spectator magazine of defending neo-Nazis and fomenting Islamophobia.

Jones had made a video for the BBC’s This Week programme, a late night political chat show hosted by Neil, about the rise of the far-right in Britain and was invited to talk about the issue.

The feud erupted between the pair after the left-wing activist accused the mainstream media of fueling Islamophobia. Jones claimed that the Spectator magazine, the right-wing weekly publication, and which Neil is chairman of, is the “classic example” of a media outlet of inciting Islamophobia in society.

The BBC’s flagship political presenter reacted angrily to Jones’ assertion, accusing him of “smears and lies,” and insisting he would not allow the left-wing journalist to “hijack” his program. Unperturbed, Jones ploughed on, much to the annoyance of Neil, who claimed it was not fair on the BBC to become embroiled in a subject that had nothing to do with them.

A visibly-riled Neil soon ended proceedings with Jones, preventing him from asking anymore questions on the issue, insisting that “tonight was not the night to deal with your lies and smears about me.”

The spat has provoked much reaction on social media, with many voicing their support for Jones, even from some unlikely quarters such as Tony Blair’s former spokesman and “spin doctor,” Alastair Campbell.

Have had my run-ins with @OwenJones84 but entirely fair to bring up role of right wing media in debate re right wing extremism and @afneil too defensive about it. Could have let him make point, answered it, and moved on https://t.co/6QbNT8liQ6

Wow Andrew Neil, of hard-right Spectator, which vomits out racist bile like a pompous British Brietbart, absolutely lost his shit at real journalist @OwenJones84 for asking him questions in a discussion of the far-right

However, there were those who backed Neil. Well-known British entrepreneur Deborah Meaden, one of the stars of TV’s ‘Dragons Den,’ accused the journalist of indulging in a “petulant outburst” and smearing Neil.

The Spectator magazine has caused controversy over the years. Last year it published an article titled: ‘In praise of the Wehrmacht.’ The Wehrmacht were the Nazi armed forces in Germany from 1935-1946. The headline was subsequently changed to ‘The truth about D-Day.’


In 2001, a former writer at the magazine, Conrad Black, accused former colleague ‘Taki’ Theodoracopulos, of uttering “a blood libel on the Jewish people wherever they may be,” in an article where he “expressed hatred for Israel and a contempt for the United States.”

Taki has also written in support of ultra-nationalist Greek political party Golden Dawn, referred to by Owen Jones, which has been accused of being a neo-Nazi organization, according to the Huffington Post.