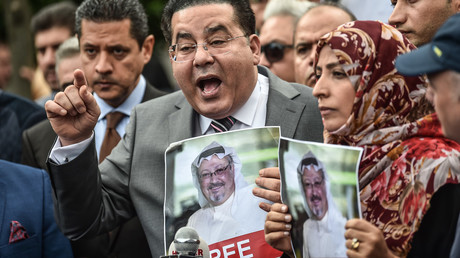 The BBC is under fire for releasing off-air comments made by Saudi Arabian journalist Jamal Khashoggi in a radio interview, three days before he went missing in Turkey – a decision some say may have endangered his life.

The BBC’s Newshour, a news and current affairs programme for the World Service, tweeted an off-air recording of Khashoggi, making comments about life under the Saudi regime, and revealed that he wouldn’t be “able to go home [to Saudi Arabia] because of the fear of arrest.”

The BBC insisted they wouldn’t normally release such a conversation, but “in light of the circumstances” they were making an exception.

Three days before he disappeared, we interviewed Jamal Khashoggi. Off air, we asked him about the possibility of returning to Saudi Arabia. We wouldn’t normally release this conversation but we’ve decided to make an exception in light of the circumstances. https://t.co/Qj9pQ2ExbPpic.twitter.com/cmWimMj93H

Their decision has prompted widespread criticism on social media. Dr H.A. Hellyer, an associate fellow at British defence and security think tank, Royal United Services Institute, who says he’s been detained by authorities, labelled the BBC’s actions as ‘reckless’. He claims he’d now have to think twice about making off-the-record conversations with any medium.

Chris Doyle, director for the Council for Arab-British Understanding (CAABU) has called the Newshour’s decision as “reprehensible.” He also appeared to question whether they had thought about the impact on the family and friends of the Saudi journalist. Others suggested the BBC’s move had contravened journalistic ethics and may have sealed the fate of Khashoggi.

I have to say, I find this unacceptable, and it makes me think twice about any conversations I’ll have off air with any medium. If I am detained (and I have been) the last thing I want is someone recklessly releasing off the record conversations I’ve done about my captors. https://t.co/T5j4wmr1Ee

BBC position on Newshour decision to air Jamal Khashoggi off record comments reprehensible – and their reaction equally. 1) Jamal may still be alive 2) Family and friends still vulnerable 3) if there was nothing new in comments, why broadcast material without permission pic.twitter.com/faQoyLQ4Ik

There aren’t many things in life that are so clearly black or white/right or wrong; however, publishing an off-air conversation, without consent, about such a highly sensitive & politically-charged topic is so clearly unethical & wrong. There’s a reason ethical standards exist.

What if he is still alive? Haven’t you just endangered his life?

A BBC spokesperson, responding to criticism said: “We do not believe this broadcast could endanger him further, especially considering his longstanding criticism of the Saudi authorities, expressed far more stridently in his newspaper columns.”

It comes as Turkish pro-government newspaper Sabah said it had identified a 15-member intelligence team it said was involved in the disappearance of Khashoggi. Saudi officials have not commented on the 15 nationals reported to have come to Turkey.

Khashoggi, a critic of the Saudi monarchy, entered the Saudi consulate in Istanbul on October 2 and has not been seen since. Turkish authorities say Khashoggi was killed. Saudi Arabia deny they have killed or abducted the journalist.