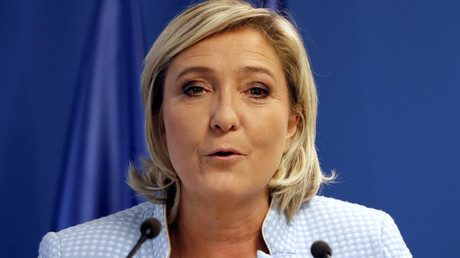 Marine Le Pen, leader of France’s far-right National Front, is to appear on the BBC’s ‘Andrew Marr Show’, according to an announcement by the program’s editor – and social media users are not happy about it.

Already facing criticism for airing the interview on Remembrance Sunday, editor of the show Rob Burley along with presenter Marr defended the move.

1)Marine Le Pen is a controversial booking. But she is a serious contender for the French Presidency whatever you think of her views. . .

2) Her party’s support – 6m in 2015 elections, 6m in the last Presidential Election and her ratings ahead of 2017 election significant. .

One Twitter user called the interview “a joke” and questioned why of all politicians, Le Pen was chosen.

Marr responded by saying she was an important figure in French politics. “A possible future French president, pro-Trump, Pro-Brexit, pro-Putin, anti-NATO & EU. Nah, why would anyone care?” he tweeted.

Others did not react positively to the BBC’s justification for inviting Le Pen on the show.

Wtf is the BBC playing at giving Le Pen airtime?! She is a fascist. Fascists use every platform they have to undermine democracy. I am done.

Le Pen on the BBC this weekend, Farage is all over British television. Then people wonder how racist politicians gain traction

The amount of time the BBC lets Farage parade his lies/miss-truthes has now gone from irresponsible to criminal. Now we get Le Pen

Le Pen is known for her controversial views on migrants and Muslims. In December 2015, Le Pen was acquitted on charges of making anti-Muslim hate speech after she compared Muslims praying on the streets to Nazis occupying France.