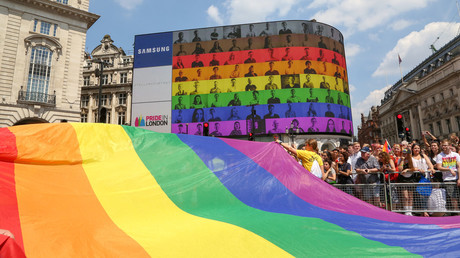 The BBC will introduce more LGBT characters in its programming and encourage staff to use “non-binary” pronouns, in an effort to combat “heteronormative” culture which has “baffled” many (gay and straight) on social media.

It’s all part of a new set of “diversity” reforms at the public broadcaster. The new portrayals of LGBT characters will be “incidental” — which means that their sexuality will not be the focus of the storyline or news item.

But it’s not just an on-screen effort. Off-air, LGBT staff will be encouraged to “bring their whole self to work” and be open about their sexuality with their co-workers — something which sounded a bit “creepy” and weird to some who reacted to the news on Twitter. Others found it contradictory that sexuality would be “incidental” on-air, but something to be discussed at work off-air.

BBC staff have been told to use non- binary pronouns and heterosexual emplyees are to wear pro-LGBTQ-bagdes to ensure that the corporation does not develop a “heteronormative culture”. Since when does companies ask employees about their sexuality? Creepy.

Slight contradiction between @bbc‘s new supposedly LGBT-friendly “bring your whole self to work” (#hokeycokey) policy and their “let’s not stereotype gay people” warning. Apart from sexual extroverts, who wants to display their sexuality in the workplace? https://t.co/PwjFh028D3

Off-screen and off-air, LGBT staff will be encouraged to “bring their whole self to work” and be open about their sexuality. – Sexuality is a private thing. https://t.co/PPgBYptIjG

The BBC wants its straight staff to wear a badge that identifies them as straight and allies of the LGBTIQ community. I suppose they’ll have to wear badges with their religion on it, next. Where will this madness end? https://t.co/6WyRX2DH9J

It has also been recommended that staff should get used to using “non-binary” pronouns where appropriate so as not to offend gender-fluid or transgender employees by mistake. This involves using the terms “them” and “they” instead of “he” and “she”.

Non-LGBT staff will even be asked to wear badges labelling themselves as “straight allies” or to use special email signatures declaring their status.

One LGBT Twitter user said the prospect of a co-worker approaching him wearing a “straight ally” badge sounded “absurdly patronising” and not very helpful.

This sounds absurdly patronising and unhelpful. If some guy with a ‘straight ally’ badge came up to me and said they were here to advance my interests, I’d politely tell them to fuck off https://t.co/jDcgVZdCXt

The recommendations have been made after a survey of LGBT staff attitudes, which found that some perceived the broadcaster to have too much of a “heteronormative” culture. LGBT staff, however, account for only 11 percent of the total workforce at the BBC and 12 percent of staff in senior positions.

I couldn’t give a monkey’s whether people are gay or not and believe in equal rights etc but only 2% of the population is gay (according the the Guardian) so why is the BBC getting its knickers in a twist? https://t.co/5rMOiJHdkZ

Must be the first ‘heteronormative culture’ I’ve heard of where just 11% of employees – who happen to be LGBT – are able to shift the way in which the UK’s biggest broadcaster works with little to no pressure.

It’s almost like the BBC is already overwhelmingly LGBT-inclusive…

Heteronormative culture = the vast majority of people. The BBC might as well be The Vatican for all the connection it has to mainstream society. Imagine working in such a stifling, thought policed environment. https://t.co/ftCIVUzD0v

James Purnell, BBC’s director of radio and education said that it’s part of an effort to be “open” and “inclusive” and attract younger audiences. Purnell cited a YouGov survey which found that 51 percent of 18-24 year-olds identify as totally heterosexual. “An organisation that appears to have a heteronormative culture is not one that is going to cut ice with them either as a consumer or an employee,” he said.

READ MORE: London museum apologizes after using word ‘womxn’ instead of ‘women’ in effort to be ‘inclusive’

But much of the reaction to the new effort on social media, even from LGBT people themselves, was bafflement — particularly as the BBC already appears to have a reputation for being very gay-friendly.

I’m genuinely not sure where the demand for this sort of thing is coming from. Most of the reaction I’ve seen from gay friends and on Twitter seems to be just as baffled as the reaction from straight people.

Another issue cropping up in the survey was that gay men are seen as the most visible members of the LGBT community at the BBC and that there needs to be more recognition of “intersectionality” within the organization.