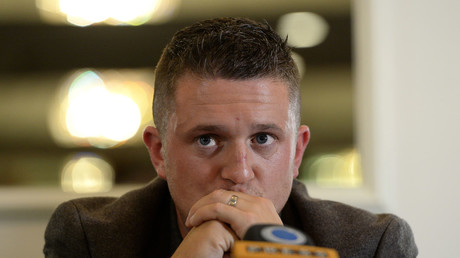 After leaving prison yesterday, English Defence League founder Tommy Robinson told the BBC “all you do is lie” refusing to give them comment. Despite this, the BBC is now accused of providing ‘a platform to the far-right.’

Despite vowing not to speak to them, many of Robinson’s supporters have taken the opportunity, much to the chagrin of anti-racist activists and left-leaning journalists, among others.

Since Robinson’s release on bail, BBC Radio 4 interviewed two of his prominent supporters; Ezra Levant, correspondent for the right-wing Canada-based Rebel Media, and former editor of Breitbart London, Raheem Kassam. Upon hearing the interview with Kassam, Labour MP David Lammy attacked the BBC for not challenging his claim that Steve Bannon is a “Kennedy democrat.”

#r4today did not even bother to push back on claims that Steve Bannon is a “Kennedy Democrat”.

The legitimation of white supremacists and fascists who plan to interfere in our politics is a grave threat.

Just listening to @BBCr4today. Why is no other guest countering @RaheemKassam on Tommy Robinson? Why is he being allowed to make out he’s a legal expert commenting on legal policy? Why wasn’t he described as as involved with Breitbart? What on earth is going on?

Following the coverage, leading Guardian columnists, Owen Jones and Jonathan Freedland, had their say. So often divided over the future of the Labour Party the pair were united in the condemnation of the public broadcaster, with Jones taking aim at BBC for ‘normalising the new far-right.’

The BBC made Nigel Farage. He’d be nothing without them. And now the media is going to normalise the new far right of Steve Bannon and Tommy Robinson. https://t.co/WPeBi0da1x

Puzzling to hear BBC Home Affairs Correspondent repeatedly referring to “Tommy” rather than “Tommy Robinson” on @bbc5live just after 11am. Not sure BBC usually adopts first name terms with people in this situation

after days of talking anti-Semitism, why the fuck are TV/radio shows giving uncritical platforms to supporters of Tommy Robinson, who are literally neo-Nazis. you can’t only claim to care about minorities when it’s party political, the far-right is a real threat to our safety.

This is the state of BBC News: the soundbite clips on the BBC1 6pm news:

On Labour anti-semitism: 1 positive voice John McDonnell vs 2 attackers
On Tommy Robinson: 1 anti racist vs 3 Robinson supporters inc one from the US + Robinson himself

All paid for by us!#BBCBias

Robinson’s conviction for contempt of court was overturned after a court ruled that the process leading to the conviction of the former leader of the English Defence League ‘was flawed.’ The move was cheered by around 20 supporters outside the courthouse, who were opposed by activists from the group Stand Up To Racism

During his imprisonment demonstrations – attracting thousands – were held to demand Robinson be released. One of the protests descended into violence with a portion of Robinson’s supporters and counter-demonstrators attacking police and each other.
Robinson is not yet an entirely free man as he has been released on bail – with conditions attached

The Guardian reports that Robinson has been ordered to attend a retrial in London and to remain at least 400 meters away from Leeds crown court while on bail.