Vauxhall MP Hoey, who fervently campaigned for Vote Leave, hit out at the BBC and its Newsnight presenter Evan Davis on Tuesday, saying: “Does anyone else think that @BBCNewsnight and @EvanHD seem to delight in undermining our country in EU negotiations #embitteredremainers”?

She found plenty of support for that view on social media, with one user suggesting ‘Remoaners’ should just accept the democratic vote.

It was a democratic vote, you lost get over it, what part of democracy do the remoaners not understand?? Keep voting till you win!! Hardly

While one said the BBC’s sole aim now is to “depress” those who voted Leave.

Yes the BBC have one goal, since they lost the vote to do all they can to depress anyone who had the nerve to vote #Brexit#Newsnight

Another user said the BBC’s coverage is mere “contempt” for those who voted for the UK to withdraw from the bloc.

It’s pure contempt of people who had the affront to vote leave. Anyway they can spin it they will, it’s obvious and bias propaganda IMHO

But there was also criticism of Hoey.  Fellow Labour MP Wes Streeting accused her of using “Orwellian” comments.

“The idea that broadcasters should simply act as cheerleaders for the government in Brexit negotiations is frankly Orwellian,” pro-Remain Streeting said, according to the Evening Standard.

“Even leading lights of the Leave campaign like Dominic Cummings believe that the Government are making a complete pig’s ear of Brexit.” 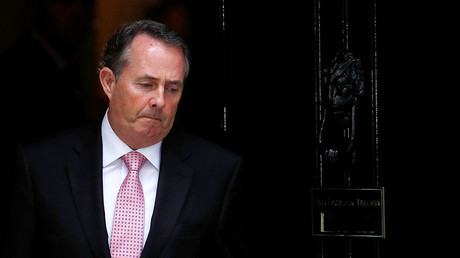 Hoey, however, is not the first to accuse the BBC of being skewed towards the Remain cause.

An independent inquiry by the News-Watch group in May found the BBC was “strongly biased against Brexit” in its coverage of the triggering of Article 50 under the Lisbon Treaty back in March, the provision officially kickstarting the two-year Brexit process.

In the week following Prime Minister Theresa May’s triggering of the article, of 124 commentators fielded by Radio 4’s Today program, a flagship news show, only eight were “given the space to make substantive arguments that the future for the UK outside the EU would yield significant benefits,” according to the study.

“The overall gloom was buttressed by the program’s editorial approach,” read the report.

“Presenters and correspondents pushed at every opportunity to illustrate existing and potential problems.

“They were strongly adversarial towards Brexit supporters, but much less so to guests who advocated that the UK was, in effect, now staring down the barrel of a loaded gun.”