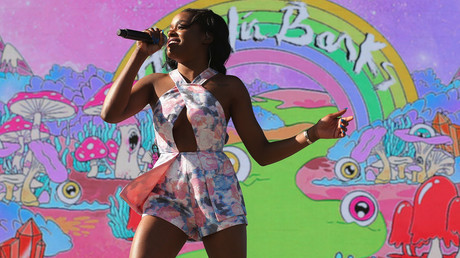 American rapper Azealia Banks has tweeted out a lengthy list of her grievances with Israeli people after she says she was racially and sexually harassed on a trip to Tel Aviv.

The artist claimed that she was treated rudely on multiple occasions due to her skin color, including being subjected to extra security checks at the airport, facing hostility in restaurants and grocery stores, as well as being “purposefully coughed on” and “stepped on” in public.

Sidebar: i love my fans but the people in Tel Aviv are really very rude. The folks at the hotel, in restaurants, at the grocery store treated me with such disregard I really didn’t enjoy my time here. The show was great tho

Why are these people like this? I don’t understand… the amount of times I’ve been purposefully coughed on, stepped on, cut in line is tooooo much . I need a strong drink

Banks even accused airline staff of losing her bag “on purpose” because she is black. In one tweet, Banks claimed that on her flight home, a rabbi sitting next to her on the plane asked if he could sex with her “for money.”

Banks also described another incident where “some old Jewish lady” screamed at her on the plane. “Y’all country is nuts,” she declared in another tweet.

On my flight back I sat next to a rabbi who taught me some numerology then asked if I’d have sex with him for money .. “away from the community”.. it was kind of kinky but I politefully declined.

No some old Jewish lady on my el al flight screamed at me in front of the whole plane for trying to put my bag where hers was. It was so racist I sat in my seat and cried

The reaction to Banks’ comments on Twitter was mixed. While some echoed her experiences in Tel Aviv, others branded Banks herself a racist for tarring all Israelis with the same brush.

I have no doubt Azealia Banks faced racism on her trip, but just want to say these particular examples (she cites more in the piece) will be familiar to literally any person who has ever been to Israel or flown on El Al https://t.co/XGVdtIJg2Npic.twitter.com/OvkTxQkqFQ

WHAT? Racism against a non-Jewish black woman? In Israel? A state whose leaders regularly use the N-word, associate black folks with death-causing diseases like ebola & cancer, who round them into camps & deport them back to the tortures they fled from? Who could have predicted?! pic.twitter.com/9UjwYgJ7HZ

You ignorant racist. Any non citizen has their bags checked before checking in. My Jewish cousins and friends complain Israelis are rude, but you go on rants blaming racism. Educate yourself on the place you go to, before you embarrass yourself. https://t.co/kwSAKnAe3M

The singer also lamented the mad “dark voodoo vibes” she felt in Israel and vowed not to return “unless it’s for some real money.”