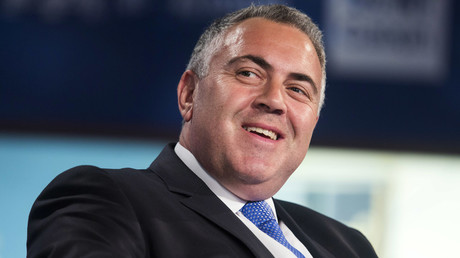 Australian Ambassador to the US Joe Hockey once said that the “age of entitlement is over” – but not for the 15 rich white men he selected to be patrons of a ‘mateship’ campaign to celebrate to promote US-Australian relations.

The list, which failed to include any women or people of color, has been met with ire online; forcing the Australian embassy in the US to expand the campaign to those from non-military backgrounds.

Olivia Newton-John wasn’t available?! Lauren Jackson? Any number of Aussie women who have had long careers in the USA??!

No women, no Indigenous Australians, no diversity at all…..

The program aims to highlight Australia’s strong military alliance with the United States over the past 100 years, marking the centenary of the battle of Hamel on July 4, 1918, which the embassy says “helped turn the tide of the First World War.”

I have seen this story and I agree that it should be fixed. I accept responsibility. Only ALL former Presidents PMs and Ambassadors from both countries were originally invited. (Incl JG). More currently being invited (MD was first to respond). https://t.co/QrGE5nq2Ry

The former federal treasurer responded to critics of the selection on Twitter, apologizing for the blunder and adding that it “should be fixed.” Hockey also said that he accepted “responsibility” for the campaign and that “only all former presidents, PMs and ambassadors from both countries were originally invited” – including Australia’s first and only female prime minister Julia Gillard, former US ambassador Genta Holmes, and ex-US president Barack Obama.

Can you spot the one who is different? Neither could I. Another all male whiteout

Australian media report that none of the three responded to Hockey’s invitation. The 15 patrons who did accept include Australia’s current Prime Minister Malcolm Turnbull, ex-Australian PMs John Howard and Kevin Rudd, former Australian ambassadors to the US, former US presidents, and senior US diplomats.

A spokesman for Australia’s Department of Foreign Affairs and Trade (DFAT) said in a statement issued to the Guardian: “DFAT is reviewing the mateship program run by Ambassador Hockey so that it aligns with our commitment to ensure balance, and reflects the diversity of Australia and the United States.”

DFAT has confirmed that the program has since been expanded to include those who “reflect and celebrate the diversity of Australia and the United States” from non-military aspects of the relationship like investment, science, the arts, and sports. Australian basketball player Matthew Dellavedova was the first to accept a patronage invitation from the expanded list.

Former federal treasurer Hockey is no stranger to controversy. After announcing the details of what was widely considered to be Australia’s toughest budget on the poor with severe and sweeping cuts to welfare payments, the ex-Liberal MP was spotted enjoying a celebratory cigar with Finance Minister Mathias Cormann.

Olivia Newton-John wasn’t available?! Lauren Jackson? Any number of Aussie women who have had long careers in the USA??!

During his tenure as treasurer, Hockey also told the Sydney Morning Herald that a proposed increase in fuel excise would not hit the poor as hard as the rich because they “don’t have cars or actually drive very far.”

Every time I see his big fat smug face I see him & Joe Hockey gloating over their appalling 2013 budget with fat cigars in their mouths. 😤😤 pic.twitter.com/WQwcfUpKJ6