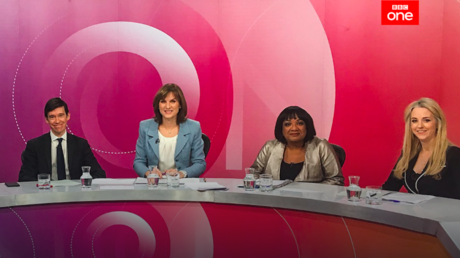 The BBC is facing an angry backlash after members of the Question Time audience revealed biased treatment of Labour’s Diane Abbott, including riling them up before shooting, making fun of her and inaccuracies on polling.

Members of the audience came forward after the programme to voice their shock and dismay at pre-show preparations which they said encouraged people to question the Shadow Home Secretary’s legitimacy and jeer her.

Jyoti Wilkinson, a Labour parliamentary staff member, was part of the audience on Thursday and said the “anti-Diane Abbott sentiment beforehand was appalling.”

Tonight I managed to wangle myself into the @bbcquestiontime audience. The way they stoked up the anti Dianne Abbott sentiment before hand was appalling – the BBC is in dire need of reform

Wilkinson told Evolve Politics  that when program host Fiona Bruce came out to warm up the audience, “the real hostility” against Abbott became evident, and the presenter “took it upon herself to instigate a roast.”

“Comments along the lines of ‘let her know what you really think’ and ‘some may think she is in the shadow cabinet because of her very close relationships with Corbyn, nudge nudge, wink wink’ were made,” he said, adding this gave members of the audience “licence to air their bigoted views in public.”

Bruce and panelist Isabel Oakeshott also faced heavy criticism online for the episode over their claims Labour is “definitely” behind the Conservatives in the polls. Recent polling shows the two parties are about even, with Labour placing slightly ahead in some.

Other audience members shared similar accounts of the behind-the-scenes behavior. “The jeers against Diane Abbott were worse than could be heard on the broadcast; was some humor at Diane’s expense from BBC staff before the recording,” Alison Martin wrote.

I was in the audience of Question Time tonight – didn’t feel like a balanced audience, though the Leavers were loud. The jeers against Diane Abbott were worse than could be heard on the broadcast; was some humour at Diane’s expense from BBC staff before the recording.

I’m told that prior to broadcast of tonight’s #bbcqt Fiona Bruce came out, introduced herself to audience and gave a 10 minute talk. Proceeded to make jokes about Dianne Abbott which were ‘in reality appaling’ then in rehearsal the floor manager did the same thing.

Fiona Bruce has interrupted Diane Abbott more times in one minute than the other guests in preceding 20.

Hope we’ll hear more from audience members about the foul play at @bbcquestiontime last night. The toxic atmosphere whipped up by panellists & new chair Fiona Bruce is a further sad decline for the show, but @HackneyAbbott was calm and composed throughout. https://t.co/pnGAr6Yrip

It was actually ferocious from a viewing perspective. I’m so glad to know that there was some representation there for Labour and Remain; as that’s not how it came across at all.

“I was absolutely disgusted about the ratio of leavers to remainers there and felt in a huge minority,” another audience member told Evolve. “Fiona Bruce basically made fun of Diane Abbott in the briefing before it aired and proceeded to do the same during the show, how is this presenter impartiality?”

The BBC denied the accusations, saying: “We firmly reject claims that any of the Question Time team treated any of the panel unfairly before and during the recording last night.”