On July 18, 2017, at a U.S. Senate Foreign Relations Committee hearing focused on “The Four Famines: Root Causes and a Multilateral Action Plan,” Republican Senator Todd Young, a former Marine, asked officials present if ongoing war in Yemen could fail to exacerbate the catastrophe developing there – one of four countries, along with Southern Sudan, Nigeria, and Somalia, set to collectively lose 20 million people this year, one third the death toll of WWII, from conflict-driven famine. Yemen is being bombarded and blockaded, using US-supplied weapons and vehicles, by a local coalition marshaled by US client state Saudi Arabia. Yemen’s near-famine conditions, with attendant cholera outbreak, are so dire that in Yemen it is estimated a child dies every 10 minutes of preventable disease. 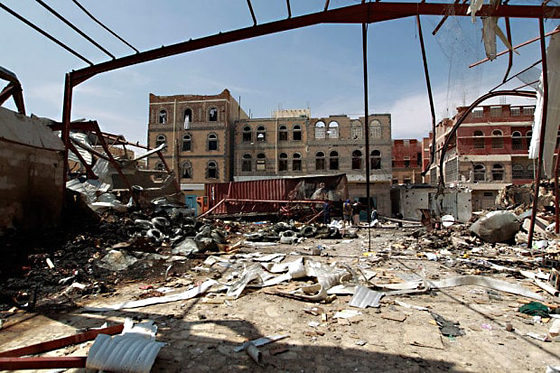 At the hearing, Senator Young held aloft a photo of a World Food Program warehouse in Yemen, which was destroyed in 2015. Senator Young asked David Beasley, Executive Director of the World Food Program, to name the country responsible for the airstrike that destroyed the food warehouse. Mr. Beasley said the Saudi-led coalition blockading Yemen had destroyed the warehouse, along with the relief supplies it contained.

A July 2016 Human Rights Watch report documented 13 civilian economic structures destroyed by Saudi coalition led bombing between March 2015 and February 2016, “including factories, commercial warehouses, a farm, and two power stations. These strikes killed 130 civilians and injured 171 more. The facilities hit by airstrikes produced, stored, or distributed goods for the civilian population including food, medicine, and electricity – items that even before the war were in short supply in Yemen, which is among the poorest countries in the Middle East. Collectively, the facilities employed over 2,500 people; following the attacks, many of the factories ended their production and hundreds of workers lost their livelihoods.”

Asked about the Saudi coalition’s destruction of four cranes needed to offload relief supplies in Yemen’s port city Hodeidah, Mr. Beasley clarified that the loss of the cranes has vastly impeded WFP efforts to deliver food and medicines. Senator Young read from Mr. Beasley’s June 27th letter to the Saudi government, only the latest of multiple requests, asking that the WFP be allowed to deliver replacement cranes. Mr. Beasley said the Saudis had provided no reply. Senator Young noted that, in the three weeks since this last letter had been sent, more than 3,000 Yemeni children had died of preventable, famine-related causes.

Medea Benjamin, of the antiwar campaign Code Pink, was at the “Four Famines” hearing, and later thanked Sen. Young for rebuking the Saudi government’s imposition of a state of siege plus airstrikes that prevent delivery of food and medicine to destitute Yemeni civilians: