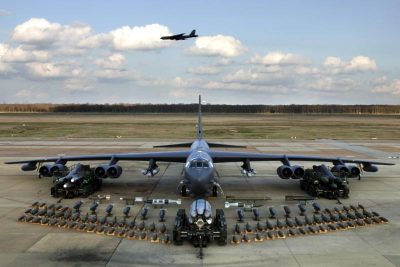 In recent budget negotiations, Senate Democrats agreed to a boost in military spending that exceeded the cap for fiscal 2018 by $70 billion, bringing the total request to an enormous $716 billion.

Inevitably, this means more Pentagon contracts will be awarded to private corporations that use endless war to line their pockets. Democrats capitulated to this massive increase without so much as a scuffle. But the move hardly comes as a surprise, given how much money flows from weapons makers to the coffers of congressional campaigns for both parties.

While the majority of the weapons money goes to Republicans, Democratic Senators Tim Kaine and Bill Nelson appear in the top ten recipients of campaign contributions — in both chambers and parties — from military contractors in 2017 and 2018. Northrop Grumman gave $785,000 to Democratic candidates since 2017. Hillary Clinton took over $1 million from the industry in 2016. Even progressive darlings like Elizabeth Warren and Bernie Sanders take money from weapons manufacturers, and Sanders supported Boeing’s disastrous F-35 because his home state had a financial stake in the program.

If neither major political party will stand up to this status quo, what can be done?

One answer might be found in the recent push to divest from fossil fuel companies undertaken by, among others, Norway and New York City. By December of 2016, 688 institutions, representing over $5 trillion in assets, had divested from fossil fuels. In an…