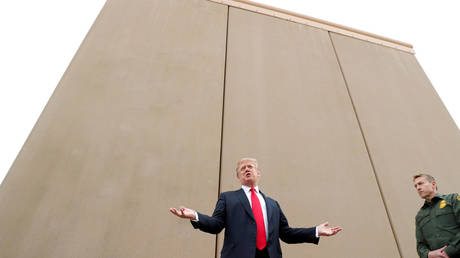 President Donald Trump threatened to place tariffs on cars coming from Mexico, or close the border altogether to pressure the country into halting the flow of illegal drugs and immigrants… but it now has a full year to comply.

One week after Trump told Mexico it had seven days to end all illegal immigration or he would close the border altogether, the president is backtracking a bit on his threat, now graciously granting the US’ southern neighbor an entire year to meet his superlative demands.

Breaking: Trump says he is giving Mexico a year notice and if drugs don’t stop flowing over southern border, or largely stop, he is going to put tariffs on car imports. per @spettypi

He also scaled down his rhetoric somewhat, saying that if drug trafficking was not stopped, or at least “largely stopped” in a year, he would introduce tariffs on the automotive industry – a demand considerably less severe than last week, when he said that “all trade” could be affected.

Also on rt.com
Trump threatens to shut down US-Mexico border ‘next week’ – even for ALL TRADE


Despite assurances that Mexico could “easily” meet his broad demands, even members of Trump’s own party warned him of the catastrophe that could result from closing the busy southern border entirely. Texas Senator Ted Cruz told the president Wednesday that his state would be “devastated” by such a drastic measure, emphasizing that “millions” of jobs in the US depend on trade with Mexico.

Trump began issuing his ultimatums following announcements last week that the number of migrant detainees in the Texas border city of El Paso had reached crisis levels, stretching border enforcement resources to the breaking point. Mexico responded that threats would not force them to do anything and insisted that they have been the best neighbor the US could hope for.