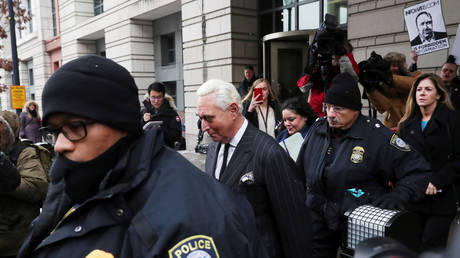 A CCTV video has emerged of the pre-dawn arrest of former Trump adviser Roger Stone that shows the self-styled “dirty trickster” being handcuffed in his boxers in his front yard by heavily-armed FBI agents.

The video shows multiple views of the agents, outfitted in tactical vests and night-vision googles, pounding on the door of Stone’s Fort Lauderdale home and pointing their flashlight-equipped M-16s at him as he steps outside, immediately placing his hands up in surrender. Clad only in a t-shirt and shorts –no shoes– he is then handcuffed and walked to his driveway.

Agents later walk Stone back into his home, still handcuffed, for unknown reasons. His shirt, ironically, reads “Roger Stone did nothing wrong.” The footage was obtained by Sinclair Broadcasting Group.


The early-morning raid involved 29 FBI agents and six vehicles – more manpower than was used against Osama bin Laden. Stone’s lawyers have alleged CNN, lurking in the shadows at the time of the raid, were tipped off beforehand and that at least one reporter allegedly had a draft copy of Stone’s indictment before he appeared in court.