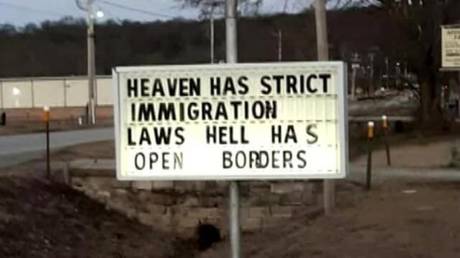 An Arkansas church is facing a fierce backlash for erecting a sign that some residents deem to be too politically charged: “Heaven has strict immigration laws, hell has open borders.”

The controversial sign was posted in the Apostolic Faith Church’s marquee in Springdale, Arkansa earlier this week.

Residents reported almost crashing their cars after driving past the sign, which they say is offensive to the community that is 36.4 percent Hispanic.

“When you put that on a sign in city that is so rich in diversity as Springdale, it is essentially a slap in the face to all the undocumented people that help make Springdale the place it is today,” local resident Alice Gachuzo-Colin told KWNA.

“A lot of undocumented and immigrant people just in general live around that area where the church is located, and having to pass by that message every day – I don’t think it’s something they should have to go through,” resident Irvin Camacho told Springfield News-Sun.

A pastor for the church said his wife came up with the idea and said the sign wasn’t intended to be political or racist, and was simply a reminder to the congregation that securing a place in ‘heaven’ isn’t easy.

“The reason we put that sign up was to tell everybody it is not easy to make heaven,” said Assistant Pastor Michael Pennington.

The word ‘immigration’ has now been removed from the sign, and Pennington said that while it was criticized by many locals, it has also been praised by members of the church who he says understood their intention. “Anybody that walks through that door is welcome to this church,” he added.