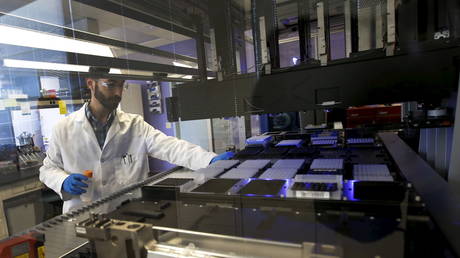 A new law being considered in Arizona would force state employees, parent volunteers and those seeking professional licenses to submit their DNA to a huge statewide database unprecedented in scope – and to pay for the “privilege.”

Anyone fingerprinted by the state for a job, volunteer position, or license –a surprisingly broad category that includes parent volunteers at public schools, government workers, real estate agents, foster parents, law enforcement and healthcare workers– would be required to submit their DNA to a central database run by the Arizona Department of Public Safety under the proposed law. Anyone ordered by the court to submit DNA for the purpose of verifying paternity or other familial relationships would also end up in the database, and even dead bodies passing through the office of the medical examiner would be subjected to DNA collection, if Senate Bill 1745, proposed by Arizona state Rep. David Livingston (R), becomes law.


The treasure-trove of genetic material would be available to all law enforcement personnel, other government agencies (potentially out-of-state and federal), and even to private interests conducting “legitimate research.” Indexed by name, social security number, birthdate, and last known address, such a sprawling database would be unprecedented in any US state.

To pay for the scheme, the bill proposes a $250 fee to be collected from anyone submitting a sample – adding insult to privacy-invading injury.

Livingston did not respond to multiple requests from the Arizona Republic to explain the motivation behind the bill, leaving legal experts to wonder what it might accomplish. The obvious explanation –facilitating criminal investigations– appears to be beside the point, since Arizona law enforcement already collects DNA from individuals convicted of felonies and misdemeanor sex crimes.

“It’s not focusing on the people most likely to be linked to crimes, it’s just spreading the net more broadly,” David Kaye of Penn State University, an associate dean for research who studies genetics in law, told the Republic. “It doesn’t seem like solving crimes is a big priority here.”


It’s possible the law is piggybacking on the recent case in which investigators in Phoenix used DNA to link Nathan Sutherland, a nurse at Hacienda Healthcare, with a patient who mysteriously gave birth in December after 19 years in a vegetative state. Employees at that facility were asked for DNA samples and submitted them voluntarily without incident, however. Sutherland was arrested when his DNA proved a match to the child’s.