A banned British teacher had his comments deemed “not anti-Semitic,” but racist after posting “Israel should be wiped off the planet” on Facebook. Some argue the anti-Semitism confusion in the UK only harms critics of Israel.

Harpreet Singh, 48, was suspended in June 2017 from his role as maths head at Sandye Place Academy in Bedfordshire, after colleagues raised concerns about posts he made to his social media.

Among Singh’s public posts and comments to his personal Facebook page he claimed: “Every sane human is anti-Semitic. Because you b******s have made Zionism synonymous with the mistreatment of Palestinians. Billions are anti-Semitic and proud of it.”

Another said “Of course we hate Jews. Israel is the most evil regime on the planet. Supported by Jews from within, and from around the world.” Later dismissed by the school, Singh defended his comments by saying he was provoked, his comments were taken out of context and he was “extremely sorry and regretted” them.

Calling the comments “offensive and racist,” but not “anti-Semitic,” the misconduct panel banned him from teaching until 2021. He can apply to have the ban lifted after the three years.

Reactions to the panel’s verdict have been mixed. Speaking to RT on a street poll, two women described the panel ruling as “one big contradiction,” suggesting that you “can’t have one without the other.” However, one taxi driver suggested: “He was only giving the opinion of the whole of the Arab world quite frankly.” 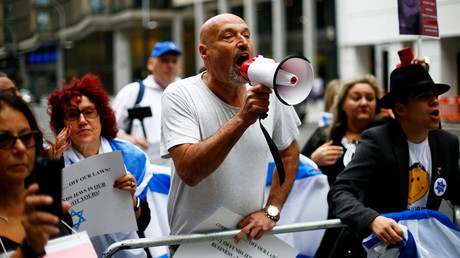 The panel’s verdict comes at a time when the issue of anti-Semitism in British politics is at the forefront of media debate. In particular, with opposition leader Jeremy Corbyn’s Labour Party. Corbyn in the past has gone on record as saying that it was not anti-Semitic to brand some of Israel’s policies as racist.

Last week, the Labour adopted the International Holocaust Remembrance Alliance (IHRA) definition of anti-Semitism after a much heated debate. The party, however, included a caveat saying the adoption of the definition did not undermine free speech on Israel, prompting even more outrage.

“People are easily confused between the terms anti-Semitic and anti-Israeli,” Amir Oren, a columnist with Haaretz newspaper told RT in relation to the ongoing debate in the Labour Party.

“But then again there are people who are not so innocent, who are trying to speak for certain policies of the current Israeli government and hide under the guise of being criticized by the anti-Semitic critics of Israel.”

For Oren, the Israeli government should be able to “cope with the criticism” of their policies without the need to hide behind claims of anti-Semitism which he deems “very convenient but inaccurate.”