Apple has always been equally an enterprise and a secular religion. The Apple Faithful do not tolerate heretics or critics, and non-believers “just don’t get it.”

So the first thing any critic must do is establish their credentials as a Believer:My first Mac model 0001 was the 21,447th made in week 32 of 1984 in Fremont, California. Now that we’ve established that, we can move on to my profound sense of anguished abandonment that Apple ceased producing the iPhone SE, the only form factor that works for me.

But Apple Faithful are accustomed to repeated bouts of anguished abandonment; it’s just one of the burdens the faithful must bear.

Focusing on the enterprise rather than the religion, Apple’s core–its revenue and profit potential–is rotten. As the charts below illustrate, despite all the happy talk about growing “services,” the hardware-software iPhone generates nearly 60% of Apple’s revenues. The iPhone ecosystem is also the foundation of the “services” currently being hyped as replacement sources of revenue. 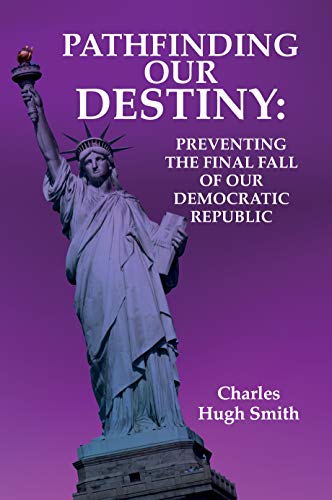 The problem is that the proprietary features of the iPhone that have generated strong demand as prices kept rising are reaching diminishing returns. People want the status of owning an iPhone, but there are limits on what the bottom 90% can pay for that status.

The new features of the $1,000 iPhones have also reached diminishing returns. This is analogous with adding memory to a computer or increasing the pixel count in a digital camera: at…