Those trying to access the White Knights of the KKK website are out of luck following a Denial of Service (DDoS) attack on their servers launched by hacktivist group Anonymous, leaving its fans in the dark.

Ku Klux Klan members began wearing their iconic white hoods to resemble, among other things, ghosts, but now opposition to the KKK has also gone spectral – without any need for hoods. The Ghost Squad, an affiliate of hacker group Anonymous, launched a DDoS attack against The White Knights of the KKK’s website server Sunday.

The White Knights of the KKK are a militant branch known for the murders of civil rights workers Andrew Goodman, James Chaney, and Michael Schwerner. That history of vitriolic hatred led the KKK to be targeted by the Ghost Squad, and it was the KKK’s penchant for hiding behind First Amendment free speech protections to express “blunt racism” that drew Anonymous’ ire, according to The Daily Telegraph.

“We targeted the KKK due to our hackers being up in their face, we believe in free speech but their form of beliefs is monolithic and evil,” one of Sunday’s attackers told the news site HackRead. 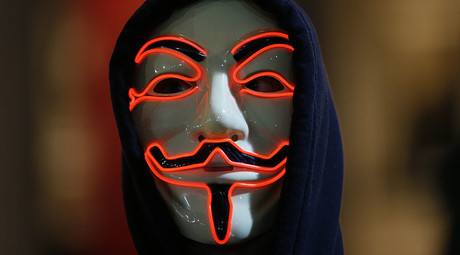 “We stand for constitutional rights but they want anyone who is not Caucasian removed from earth so we targeted the KKK official website to show love for our boots on the ground and to send a message that all forms of corruption will be fought. We are not fascist but we certainly do not agree with the KKK movement. They are the Fascists and they are the Racists.”

Sunday’s attack is just the most recent by Anonymous against the KKK. In November 2015 they released to the world a list of hundreds of alleged KKK sympathizers, a data dump the hacktivist group called a “form of resistance against the violence and intimidation tactics” used by members of KKK groups throughout history.

Picture a DDoS attack as a pyramid of onslaughts, beginning when a hacker sends a command to other computers and IP address to begin an attack process. Once those computers receive the command, they send more attack commands to even more computers and system that then send a large volume of requests onto the server, where they overwhelm the system and cause it to crash.

At the point of this article’s publication, the website was still offline.