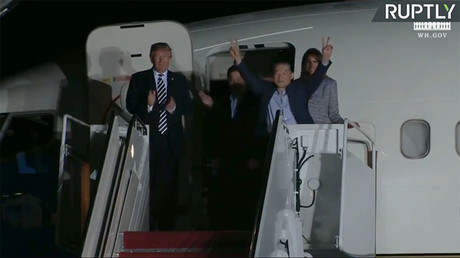 Donald Trump is receiving US citizens at the Andrews Air Force Base in Washington DC after they were freed from North Korean captivity with the help of Secretary of State Mike Pompeo, who negotiated their release.

Three Americans, who were earlier released by North Korea, landed at Andrews Air Force Base in Washington DC to be received by US President Donald Trump. Kim Hak-song and Kim Sang-duk, AKA Tony Kim, taught at the Pyongyang University of Science and Technology (PUST) before being accused of espionage in 2017. Kim Dong Chul was arrested in 2015.

Secretary of State Mike Pompeo secured their release during talks with North Korean leader Kim Jong-un about the upcoming summit with US President Donald Trump, the time and place of which is yet to be officially announced.

A flight carrying Pompeo and the three released prisoners landed to refuel in Anchorage, Alaska before heading for Washington. Trump had tweeted that he intended to greet them personally.

“We would like to express our deep appreciation to the US government, President Trump, Secretary Pompeo, and the people of the United States for bringing us home,” the trio said in a statement released by the State Department on Wednesday evening. “We thank God, and all our families and friends who prayed for us and our return. God bless America, the greatest nation in the world.”