Over half of Americans, both Democrats and Republicans alike, chose ‘worrisome’ to describe 2017, according to a new survey.

The poll, carried out by Survey Monkey and published Sunday, showed 52 percent of respondents including 64 percent of Democrats and 38 percent of Republicans, found the past year to be “worrisome,” while the second most popular word choice was “chaotic.” 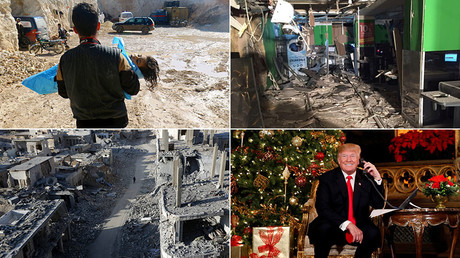 Donald Trump entered the White House in 2017 as president for the Republican Party, although his leadership has been contentious even within his own party. The Commander-in-Chief faced mass protests and legal challenges over his so-called ‘Muslim ban’ and the alleged ‘Russia collusion,’ and also heavy criticized for his policies on climate change and transgender rights, along with his handling of the NFL protests.

Trump also presided over riots and street fighting between far-right (or “alt-right”) and far-left activists, also known as Antifa. This sometimes violent rivalry reached a peak in August when a young woman was killed and dozens more injured when a suspected white supremacist rammed a car through a crowd in Charlottesville.

Outside politics, natural disaster struck when storms and hurricanes ravaged the southern United States and Puerto Rico. The year will also be marked with the deadliest mass shooting in American history, when a lone gunman, Stephen Paddock, armed with a small arsenal of assault rifles, shot dead 58 people and wounded more than 500 others at a music concert in Las Vegas before committing suicide. The massacre reignited the fierce debate about gun laws in the United States which are among the most liberal in the developed world.