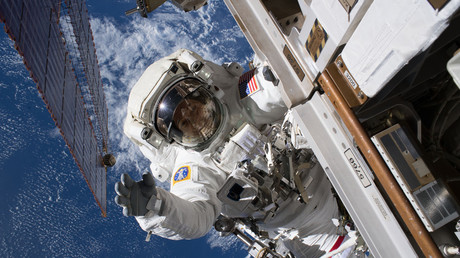 When you want a job done right, send in the Russians. NASA has renewed a contract with Russian firm Energia to maintain and repair toilets on board the US segment of the International Space Station.

Why does the US segment use Russian toilets? In 2007, NASA bought the Russian-designed commodes for $19 million after US-made designs experienced a series of malfunctions. The Russian loo has a variety of high-tech features, and it can recycle urine as drinking water and dry solid waste to eliminate odor and bacteria.

Russian cosmonauts, however, were stuck using an old-fashioned latrine, launching boxes of excrement overboard to burn up in the Earth’s atmosphere. The Russians were barred from using toilets on the American side of the station.

Russian Twitter users reacted to the latest news with a mix of sarcasm and derision. “Maybe we should sanction them?” teased Vitaly Tretyakov.

“Yes, maybe we should sanction them,”agreed another user. “And then set up a fee for use of the toilet in the Russian segment of the ISS.”

“Let them pee out the window,” suggested one commenter, while another suggested outsourcing the problem to the private sector: “Let them deliver pampers on Musk’s rockets.”

Another reaction was more pensive. “And how did they fly all the way to the moon during the last century, if even half a century later they can’t repair a toilet in orbit 408 km above the planet?” he asked.