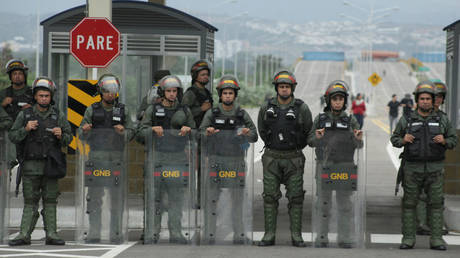 In the alternative reality of CNN, Venezuela closed a border bridge to stop delivery of humanitarian aid from the US. The news network apparently missed the thorough debunking of this myth.

Venezuela is moving towards a feared spree of violence on its border, as opposition leader and Washington darling Juan Guaido threatens to take a shipment sent by the US across it in defiance of the border guards.

The US and its protégé say the crates are filled with much-needed medicine and food, but the government in Caracas fears that the aid is actually weapons meant to arm the opposition. After all, US envoy for Venezuela Elliott Abrams did exactly that for the Contras in Nicaragua – running guns under the guise of humanitarian aid.

Also on rt.com
A bridge too far: US claims Venezuela blocked aid deliveries… at a crossing that was never open


The visual symbol of the entire confrontation is the Tienditas Bridge on the border between Venezuela and Colombia – empty and blocked by shipping containers and a petrol tank. Two weeks ago, the US mainstream media banded behind the Trump administration to repeat its claim that the bridge was closed by President Nicolas Maduro’s government to prevent the delivery of the aid.

The crossing was actually finished in early 2016, but never opened to traffic – relations between the two countries were already poor. This fact was pointed out by the alternative media, but who cares about those pesky facts?

It’s Thursday, February 22, and CNN is there, reusing the same debunked claim in its fresh report on Venezuela: “When the US sent a shipment of medical and food supplies to the Venezuelan border last week, Maduro’s regime installed a blockade on one of the bridges that connect Venezuela and Colombia.”

Isn’t it wonderful to be able to publish fake news and not be called a ‘fake news network’ by the president?