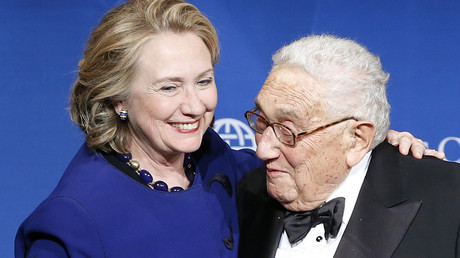 “Hillary Clinton has surrounded herself with (neo) “conservative” Iraq war hawks from Kissinger to Kagan,” the poll reads.

Hillary Clinton has surrounded herself with (neo) “conservative” Iraq war hawks from Kissinger to Kagan. Is she the:

The tweet recalls Clinton’s open admiration for Henry Kissinger – the architect of dictator Pinochet’s rise to power in Chile, and a key factor in expanding the Vietnam War.

READ MORE: As Hillary Clinton kisses up to Henry Kissinger, RT looks at 4 of his most heinous acts

It’s an issue former Democratic rival candidate Bernie Sanders alluded to during the primaries when he criticized Clinton for apparently seeking advice from “one of the most destructive secretaries of state” in the history of the US.

Meanwhile, Robert Kagan – also mentioned in the WikiLeaks tweet – co-founded a thinktank that pushed for American militarism abroad and supported the Iraq War.

“The Project for the New American Century is a non-profit educational organization dedicated to a few fundamental propositions: that American leadership is good both for America and for the world; and that such leadership requires military strength, diplomatic energy and commitment to moral principle,” the website for the now-dissolved group states.

Republican foreign policy commentator Kagan headlined a Clinton fundraiser in July which asked supporters to donate at least $50 towards the former secretary of state’s bid for the White House. At the fundraiser Kagan is reported to have thrown his weight behind Clinton’s campaign.

“I would say that a majority of people in my circle will vote for Hillary,” he is quoted as saying at the event.