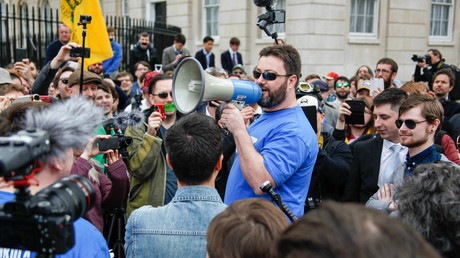 UKIP have welcomed a trio of high-profile social media activists linked to the ‘alt-right’ into their ranks, which may alarm some members already concerned about the direction of the party under the leadership of Gerard Batten.

The addition of Paul Joseph Watson, Carl ‘Sargon of Akkad’ Benjamin, and Mark ‘Count Dankula’ Meechan, all with huge social media followings from those on the so-called ‘alt-right,’ will no doubt cause controversy for UKIP. New leader Gerard Batten has faced criticism by former UKIP leader Nigel Farage for his public support of ex-EDL leader and anti-Islam activist Tommy Robinson.

The party’s rules prevent former members of the EDL, such as Robinson, or other far-right groups from joining, but it would appear the newest additions to the party have been given the all-clear, despite their associations. A UKIP spokesman has confirmed that Watson, Benjamin, and Meechan had joined, saying he “took issue” with the view they were from the far-right, the Guardian reports.

Paul Joseph Watson, editor of Alex Jones’ conspiracy news site InfoWars, has just under 1.3 million YouTube subscribers to his channel. In his latest video, he talks about Trump’s highly controversial child immigration detention cages, telling his viewers: “Save me the sanctimonious moralizing; The left doesn’t care about the children.”

Watson denies being part of the ‘alt-right’. He tweeted in August 2017 “How many times do myself, @JackPosobiec & @Cernovich have to be attacked by the alt-right before the media stops calling us alt-right?”

Benjamin, better known as Sargon of Akkad, came into the social media spotlight for his fervent anti-feminist comments, and was then accused of igniting a series of Twitter rape threats by sympathizers to his views against Labour MP Jess Phillips. He is now banned from Twitter, but maintains a social media presence on YouTube where he has 810,000 subscribers. He denies being an ‘alt-right’ sympathizer, insisting he’s a classical liberal.

Meechan, known to his social media followers as Count Dankula, shot to public notoriety earlier this year after training and filming his girlfriend’s pug to perform a Nazi salute on command, while using anti-Semitic language relating to the Holocaust. In April, he was convicted of being “grossly offensive” under the Communications Act 2003, and fined £800 (US$1,060). Meechan claims his joke was taken out of context.

The Count has recently exchanged words with Guardian journalist Peter Walker over what he sees as wrongly being described as ‘alt-right.’

“There is one key thing that actually makes someone alt-right that defines them from the other ideologies, the belief in an ethnostate. That is basic alt-right 101. Neither I, nor Tommy [Robinson], believe in that,” he told Walker.

True there is variance, but there is one key thing that actually makes someone alt-right that defines them from the other ideologies, the belief in an ethnostate. That is basic alt-right 101.

Neither I, nor Tommy, believe in that.

A spokesman for Hope Not Hate, a group that campaigns to combat racism and fascism, commenting on UKIP’s new recruits, told the Guardian: “There are attempts afoot to forge an alliance between extreme figures who have made their names online, those involved in electoral politics, and those out on the streets, around an anti-Muslim and pro-‘free speech’ agenda.

“In following the path he’s chosen, Batten is leading UKIP down a dangerous route, and the acceptance of figures such as Watson is further evidence of this.”