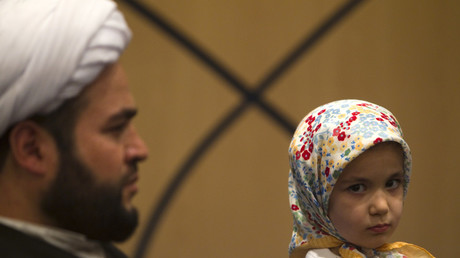 Retired Marine Colonel Oliver North, who gained notoriety for his involvement in the Iran-Contra gunrunning scandal and lying to Congress about it, took to Fox News on Wednesday to accuse the Iranians of lying.

“Never believe an Iranian — because if their lips are moving, they’re lying,” North told Fox host Sean Hannity on Wednesday. The new president of the National Rifle Association and Hannity were discussing the airstrikes on what Israel said were Iranian forces in Syria that had fired on Israeli positions earlier in the day.

North made a similar statement the day before, accusing Tehran of lying about its adherence to the Iran nuclear deal and calling for renewed sanctions on the Islamic Republic.

“The Iranians have been lying. Every time their lips move, they’re lying,” he said on Fox & Friends. Hours after North’s statement, President Donald Trump withdrew the US from the Iran deal.

“You know a thing or two about the release of hostages,” Hannity said to North on Wednesday, tying the interview to the Trump administration’s release of three Americans from North Korea.

Working for President Ronald Reagan’s National Security Council in the 1980s, North oversaw the sales of US weapons to Iran in exchange for the freeing of American hostages held in Lebanon by Iranian-backed Hezbollah fighters. Iran used the arms in its war with Iraq, a country quietly supported by the US at the time. The sale bypassed US sanctions on Iran.

The money raised from US weapons sales to Iran was funnelled to the Contras in Nicaragua, a right-wing anti-government insurgency. North was later found guilty of lying to Congress about the affair, shredding documents and receiving an illegal gratuity, but his convictions were overturned in 1990.

North’s comments on Iran drew the ire of many Trump critics on Twitter.

“Never believe an Iranian,” said NRA’s Felonious North, who in the 1980s played a central role in the Iran-Contra scandal. “Because if their lips are moving, they’re lying.” https://t.co/VsjxmzeWkP via @HuffPost

And so we have another convicted felon attacking the innocent: While serving on the National Security Council during the Reagan administration, North was charged with lying to Congress and shredding government documents on the Iran-Contra affair. https://t.co/3SSQoz5B5t#Resist

The NRA tapped North to succeed Pete Brownell as president on Monday, at a time when gun rights in America are under increased scrutiny. Brownell endorsed North as his replacement, saying that “in these extraordinary times, a leader with his history as a communicator and resolute defender of the Second Amendment is precisely what the NRA needs.”

His appointment set tongues wagging on the left, some of whom predictably claimed that the NRA was funded or controlled by Russia.

Oliver North has just been announced as the new @NRA president. His record includes lying to Congress, shredding WH documents, funneling $$ from an arms deal w/ Iran, AND being a @FoxNews host. https://t.co/nboaG3A5D4

By “A total warrior for freedom,” the @NRA must mean Americans like Oliver North who arm our enemies. That makes sense given that the NRA has dubious and undisclosed monetary ties to Putin and his allies in Russia. https://t.co/pN5Ro7FOaY