Like them or loathe them – they’re fascinating creatures, those royals. Prince Charles, long considered only interested in Cumbrian farmers and Chelsea new-builds, is fast becoming the most interesting of all.

An explosive new biography is blowing the lid off the future king’s alleged eccentricities. It’s unauthorized, of course, but if what Tom Bower has written in Rebel Prince is true, we’re surely in for a right royal laugh. Well, if you don’t mind the fact that we’re paying for the madness of the monarch.

Bower’s book was published on Thursday by William Collins – here are the highlights:

According to the biography, Charles is the easiest and weirdest party guest ever.
Bower claims Charles has a publicly-funded police officer carry his Martinis to events. And, it is claimed, he even comes along with his own food, though Charles’ personal crime-stopper doesn’t have to lug that around as well – that honor is bestowed upon an aide.

Trains, planes & the mystery of the itchy seats

Anyone who’s ever drunk-dialled a cab on a boozy night out knows taxis can be costly. But Charles, according to Bower, has probably broken the record for a costly beer-run. The biography alleges the Prince took a trip on the royal train, from Highgrove to Penrith – all to visit a pub. It was a journey that cost £18,916. We’re not yet sure of the name of the pub, although we’d love it to be the King’s Head. 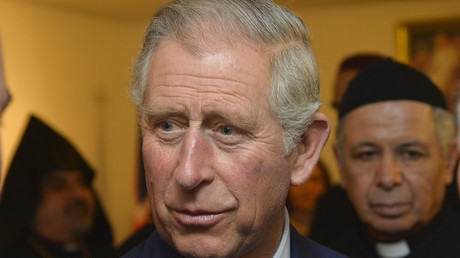 Before you judge – It hasn’t always been plain sailing for Charles. Once, he had to fly club class. The prince reportedly complained in his journal after flying to Hong Kong in a chartered British Airways plane: “It took me some time to realise… that this was not first class (!), although it puzzled me as to why the seat seemed so uncomfortable. Such is the end of Empire, I sighed to myself.”

How many staff does it take to change a lightbulb? Well, in Prince Charles’ house it depends where the light is. There are, Bower says, staff “each responsible for a short segment of corridor” in the Royal residence. In fact, according to the book he has a 120-strong retinue – including three footmen to escort visitors to his office. They all have specific roles. Take the “retired Indian servicemen… deployed to prowl through the undergrowth at night with torches and hand-pick slugs from the plants of leaves,” for example.

There are four valets to help him change his clothes up to five times a day and four gardeners who hand-pick slugs from the garden “because of the prince’s hatred of pesticides.” The gardeners are reported to be tasked with laying “flat, nose down on a trailer” to pluck weeds by hand.

Nothing says born with a silver spoon like, well, this. Bower writes Charles threw a spectacular fit and “shrieked” when he discovered plastic on his plate. The mystery was soon solved by wife Camilla, when she identified the unidentified stretchy, shiny object as cling film.

This isn’t the only time Charles has thrown down his tiara in a tantrum.

Bower claims he told a visitor the Queen reads newspapers, yet he does not because “It would drive me mad.” This could well be true as reportedly he has a habit of throwing objects at the radio.

And the dinner-party guest extraordinaire apparently made a real scene once, when his feelings were hurt. Bower says he hurled a dinner plate to the floor party after learning of his low popularity ratings. Charles has a reputation for his outbursts, Bower writes. “Even my office is not the right temperature. Why do I have to put up with this? It makes my life so unbearable,” the Prince is quoted as saying to an assistant. One friend describes Charles as “an Olympian whinger.”

Bower says he interviewed more than 120 people for his biography of Charles, who he claims has “resorted to machination and media manipulation to restore his position” since 1997. Bower concludes the prince’s legacy is “tarnished by his addiction to luxury, his financial mismanagement, his disloyalty to professional supporters, and the torrid relationships with his family”. Clarence House has stated that no comment will be issued on the allegations made in the book.