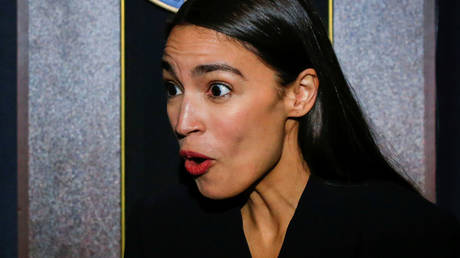 Ocasio-Cortez will feature as a “butt-kicking” political superhero in a new comic book called ‘Alexandria Ocasio-Cortez And The Freshman Force,’ which is billed as “satire that takes aim at Washington” and that will “spare no one.”

The cover of the first issue “New Party, Who Dis?” – a reference to the jab Ocasio-Cortez made at her congressional colleague Joe Lieberman on Twitter – features the politician wielding a sword and wearing a Superwoman-style outfit in front of Capitol Hill.

Other artwork for the project, published by Devil’s Due, depicts the self-described Democratic Socialist with her smartphone in hand, wearing her signature white suit, hoop earrings and red lipstick.

While Ocasio-Cortez is seen as somewhat of an outsider even by her own party, it looks like the comic book version of her life will mainly take aim at Republicans – and see the Democratic establishment get off the hook. Describing the comic in more detail, the publisher said it “satirically skewers everyone from President Trump to his near-endless team of morally-compromised Republican cronies.”

The first issue of the Ocasio-Cortez-themed comic is set for release on May 15, in case you wanted to mark your calendars.