Alex Jones was stalking the corridors of the Capitol again, heckling Google CEO Sundar Pichai ahead of a House hearing focused on the tech giant’s data collection and alleged political bias.

As Pichai made his way into the House Judiciary Committee hearing on Tuesday morning, Jones followed the CEO down the hall, repeatedly chanting “Google is evil!”

Accompanied by conservative strategist and fellow Infowars personality Roger Stone, Jones ranted at Pichai for Google’s alleged censorship of conservative voices, until Pichai’s police escort warned the bellicose conspiracy theorist to be quiet or be arrested.

“They’re going to talk about me in this committee, I will be talked about – so what am I supposed to do?” Jones asked reporters. “His people come lie to Congress over and over and over again and we don’t get to respond to them,” he added.

Jones’ interest in free speech on the internet is a personal one. Google was one of more than a dozen tech companies that banned Jones from using some of its services this August, for allegedly promoting violence and for hate speech. The move was cheered by social-justice types but was decried by conservatives and free-speech advocates. 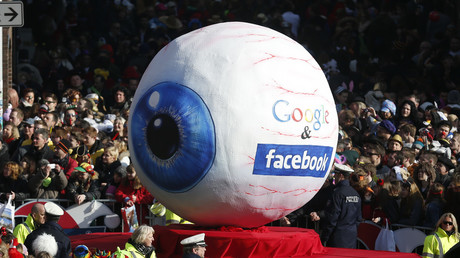 While Jones may have favored a more confrontational approach, lawmakers inside the hearing took Pichai to task on a litany of accusations. Democrats slammed Pichai for not cracking down harder on Russians purchasing political ads (a paltry $4,700 worth, according to Pichai himself). Both parties questioned him on his company’s opaque data collection policies, while Republicans grilled him on persistent allegations of liberal bias.

Rep. Zoe Lofgren asked Pichai why a picture of President Donald Trump was for a long time the first result for a search for the word “idiot,” on Google. Pichai explained this away as the work of impartial algorithms, but that explanation didn’t satisfy some lawmakers.

Rep. Lamar Smith (R) from Texas asked Pichai whether Google’s algorithms themselves are biased, and whether pro-Trump and anti-immigration content had been deliberately tagged as “hate speech.” Pichai again denied the allegations of bias.

His online presence greatly diminished by the bans, Jones is unlikely to be sated by the results of Tuesday’s hearing. In an Infowars stream of proceedings titled ‘Live at the Google Treason Hearings’, Jones called Google “absolutely the most horrible corporation on earth.”