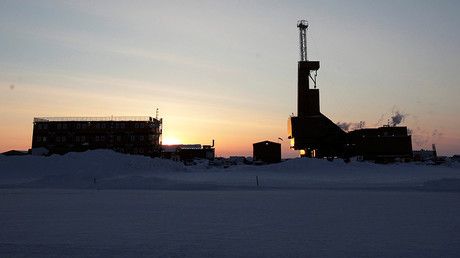 An Alaska senator has introduced legislation to open up the Arctic National Wildlife Refuge to oil and gas drilling, renewing the longstanding debate over the protected region.

Lisa Murkowski (R-Alaska) is chair of the Senate Energy and Natural Resources Committee and says drilling on the protected land would bring in at least $1 billion over 10 years.

The Arctic National Wildlife Refuge (ANWR) has been a source of conflict between environmentalists wishing to protect the land and wildlife there, and the energy sector backed by conservative politicians who are eager to drill.

“Our instruction is a tremendous opportunity both for our committee and our country,” Murkowski said Wednesday. She has proposed similar drilling legislation in each session of Congress since becoming a senator in 2002.

Murkowski said drilling in the ANWR would put Alaska and the country “on a path toward greater prosperity by creating jobs, keeping energy affordable for families and businesses, generating new wealth, and strengthening our security.”

“This bill would give away Arctic Refuge oil to China and other countries hungry for exports,” Adam Kolton, executive director of the Alaska Wilderness League, said in a statement.

“It would allow roads, pipelines, gravel mines and well pads to be erected across the entire birthing grounds of the Coastal Plain, where caribou calve and where polar bear mothers den.”

The Senate budget plan requires the Committee on Energy and Natural Resources to find $1 billion in new revenue over the next decade, and Murkowski thinks drilling in the ANWR is the way to bring in that money.

“Nothing in this bill can magically make these fantastical revenue assumptions materialize,” Kolton said. “What this bill would do is turn America’s last great wilderness, into a lost wilderness. Senator Lisa Murkowski had promised some kind of new and improved directional drilling, but that’s just a talking point. What we got was simply misdirection and deception.”

Bloomberg also disputes Murkowski’s figure, reporting the US is likely to collect “less than a fifth” of the billion dollar figure over 10 years.

In order to pass, the legislation needs a 51-vote majority in the Senate instead of the usual 60, because it is written under the umbrella of the 2018 budget resolution. There are 52 Republicans in the Senate.

The planned drilling would take place in the so-called ‘1002 Area’ of the ANWR, spanning some 1.5 million acres. The area is home to polar bears, arctic foxes, moose and hundreds of species of migratory birds. According to Murkowski, however, it’s the “non-wilderness part” of the refuge.

The 1980 Alaska National Interest Lands Conservation Act (ANILCA) affords special protection to the ANWR area. The act deferred a decision on the management of oil and gas exploration in the 1002 area, which is what Murkowski and others use to claim the area as “non-wilderness.”

Interior Secretary Ryan Zinke also has his sights on Alaska’s oil. In May, he signed an order to “jump-start Alaskan energy production.”

Murkowski’s bill is scheduled for a committee hearing on November 15.