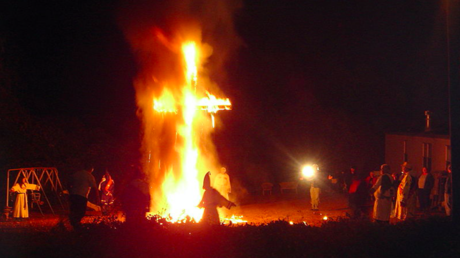 An Alabama newspaper editor has called on the Ku Klux Klan to ride back into town to fight taxes and hang “socialist communists” using hemp ropes.

Goodloe Sutton, the publisher of the Democrat-Reporter newspaper in Linden, Alabama, called on the notorious white supremacist group to dust off their white hoods and “night ride again” because “Democrats in the Republican Party and Democrats are plotting to raise taxes in Alabama.”


The publisher and owner of the newspaper slammed Democrats in the column published last week, warning, “This socialist-communist idealogy [sic] sounds good to the ignorant, the uneducated, and the simple-minded people.”

“Seems like the Klan would be welcome to raid the gated communities up there,” he wrote.

When Sutton was asked about his editorial, he doubled down, telling the Montgomery Advertiser, “If we could get the Klan to go up there and clean out DC, we’d all been better off.”


“We’ll get the hemp ropes out, loop them over a tall limb and hang all of them,” he added, before clarifying that he was “not calling for the lynchings of Americans.”

“These are socialist-communists we’re talking about,” he said.

When asked if he believes the Klan was a violent organization, he said, “Well, they didn’t kill but a few people. The Klan wasn’t violent until they needed to be.”

Incredibly and tragically, this is a true story. We continue to spiral downward into our broken past on race. Honest conversations or we won’t hold together. It’s urgent.

In this case the press really is the enemy of the people.

Linden is a town with a population of just 1,936. Although the Democrat-Reporter newspaper circulation is only 3,000, Sutton’s comments spread across social media where they inspired outrage and disgust.

A question. Why can Goodloe Sutton summon the kkk to go to DC to clean house & not be arrested? Sutton said “We’ll get the hemp ropes out, loop them over a tall limb & hang all of them.” Isn’t that criminal, inciting people to cause bodily harm with intent to kill?

These are domestic terrorists. They are implying they want the KKK to kill Democrats and Democratic Politicians. The state allows this, by the way. And clearly the papers encourage it.

The Ku Klux Klan were a white supremacist group whose members waged an underground campaign of intimidation and violence against black people and those who supported giving equal rights to black Americans. Their violence extended to bombing black schools and lynching people, which often included dismemberment before hanging victims. At least 4,000 were lynched between 1877 and 1950.