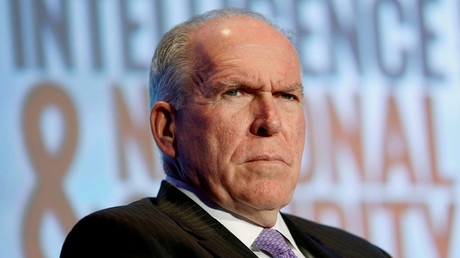 Democrats have been vocal in condemning US President Donald Trump for revoking former CIA chief John Brennan’s security clearance, forgetting that time he spied on a Democrat-run Senate committee in the name of #Resistance.

On Wednesday, Trump revoked Brennan’s security clearance, which had allowed the ex-spymaster to continue to access classified documents since he resigned last January.

The White House said that Brennan used his security clearance to “sow division and chaos,” and lend a sheen of credibility to his public criticisms of the president. The White House looked into revoking Brennan’s clearance after he accused Trump of “treason” for meeting with Russian President Vladimir Putin last month.

Straight away, Democrats jumped in to defend Brennan’s character and to blast Trump for pulling his clearance. Rep. Adam Schiff (D-California), ranking member of the House Intelligence Committee, said that “In adding John Brennan to his enemies list, Trump demonstrates again how deeply insecure and vindictive he is.”

In adding John Brennan to his enemies list, Trump demonstrates again how deeply insecure and vindictive he is — two character flaws dangerous in any President.

An enemies list is ugly, undemocratic and un-American. I also believe this action to silence a critic is unlawful. https://t.co/bfOhThIWfq

A flimsy excuse to set a terrible precedent.

Trump is clearly punishing @JohnBrennan for criticizing him, cracking down on a dissent and retaliating against a private citizen’s free speech.

The President has adopted the weak, paranoid, authoritarian behavior of a dictator. https://t.co/c04RuFjihx

Former Vice President Joe Biden called Trump’s act “unbecoming of a President,” and warned that it would only embolden Brennan in his public crusade against Trump.

In the time I have known him, John Brennan has never been afraid to speak up and give it to you straight. Revoking his security clearance is an act unbecoming of a President. If you think it will silence John, then you just don’t know the man.

Biden’s words were echoed by former ambassador to Russia Michael McFaul, who said that clearance or not, Brennan “will now be just as vigorous & vigilant in defending American values.”

I had the privilege of working with @JohnBrennan at the White House. I have never met anyone more dedicated to defending our national security than John. He will now be just as vigorous & vigilant in defending American values, including free speech, without a sec clearance.

Brennan’s thesaurus-heavy  Tweets and self-righteous grandstanding have made him a hero to the anti-Trump #resistance. However, while Democrats are falling over themselves to pat the former career spy on the back, there was a time when Brennan spied on Democratic lawmakers compiling a report into his agency’s use of torture tactics – and got away with it.

In 2014, as the Senate Intelligence Committee was compiling a lengthy report into the CIA’s use of ‘enhanced interrogation techniques’ at its secret prisons, chair Dianne Feinstein (D-California) accused Brennan’s agency of secretly monitoring the committee’s computers and removing sensitive documents.

After initially denying any wrongdoing and rejecting Feinstein’s “spurious allegations,” Brennan quietly apologized to lawmakers after an internal review proved the senator right.

Despite being caught red-handed spying on his overseers, the Obama administration Department of Justice declined to press charges against Brennan, and he remained in charge of the CIA.

Just as Democrats seem eager to forgive past wrongs in the name of anti-Trump resistance, the President’s supporters on the right were quick to remember Brennan’s shady practices and praise Trump’s decision to revoke his clearance.

I wonder who their “senior national security source” was…

Libertarian-minded Senator Rand Paul (R-Kentucky), who first proposed pulling Brennan’s clearance, cheered Trump’s decision on Wednesday, and took the opportunity to remind voters that he opposed Brennan’s stewardship of the CIA from the get-go.

I applaud President Trump for his revoking of John Brennan’s security clearance. I urged the President to do this. Read more here: https://t.co/SAQNTJ1UAn

True to form, Brennan himself responded to Trump in a verbose tweet, stating that “my principles are worth far more than clearances,” and vowing to keep up the #resistance.

Press Secretary Sarah Sanders said in July that they had “politicized, and in some cases monetized, their public service and security clearances.” Since leaving their positions, all have become household names for their public opposition to Trump. Brennan now works for NBC News as a “senior national security and intelligence analyst,” Clapper found a new home at CNN, and Comey penned a book thrashing the Trump administration and comparing Trump himself to a “mob boss.”

Hayden told CNN viewers on Wednesday that Trump’s decision to revoke Brennan’s clearance was “threatening to the rest of us” and amounted to an attempt to silence dissent.

What a vindictive little bitch.