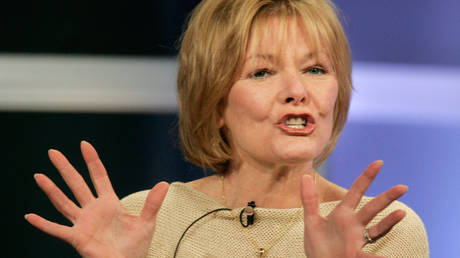 Actress and comedian Jane Curtin has sparked some fresh 2019 Twitter drama by announcing that her resolution for the year ahead is to “make sure that the Republican party dies.”

Curtin revealed the somewhat unorthodox resolution during a New Year’s Eve broadcast on CNN, prompting both praise and indignation from viewers, who eagerly shared their thoughts on social media.

One viewer loved it so much he inquired as to how he could turn the sound bite into his ringtone, while one blue-ticked journalist felt the moment was so impressive that he hailed Curtin the “first hero” of 2019.

Wakes up, checks Twitter, sees that Jane Curtin is trending, sees why, feels happy that 2019 already has its first hero.

Another Twitter user was so overcome with admiration that she declared Curtin her “spirit animal” — while another said the actress was a “national treasure.” One person felt that the resolution was simply “saying what everyone is thinking.”

It wasn’t all declarations of love and clapping gifs for the Saturday Night Live alum, however. Conservative Twitter was unimpressed and brought some top class snark to the occasion, to say the least.

“Hateful, but what do you expect from the loving and tolerant left,” one unamused Twitter user wrote, while some assumed the reason Curtin was trending was because she had actually died.

Hateful, but what do you expect from the loving and tolerant left

One questioned why he had ever watched SNL at all, and another advised CNN to “stay classy.” Curtin “mispronounced Democratic Party,” another quipped.

One took aim at the actress star for “turning a holiday celebration into a political statement” and said they were switching over to Fox News “for the balance” instead. “Who is Jane Curtin?” another asked sarcastically.

@CNN#cnnnye. Really? Turning a holiday celebration into a political statement? Jane Curtin? When will it stop? Switching to @FoxNews for the balance of the evening.

Yet, some tried to cool down the hotheads a bit, reassuring them that Curtin “meant the political party not the actual people” when she wished death upon the GOP.

Jane Curtin is the Queen of snark! I love her! People do realize she meant the political party not the actual people! Sarcasm is really lost on the MAGA crowd.

Curtin, who rose to fame in 1975 as one of the original SNL cast members and later starred in hit sitcoms, was among a number of Hollywood celebrities announcing their 2019 resolutions on the CNN broadcast. Actor Terrence Howard ambitiously announced he would like to “break down the entire economic global infrastructure,” while Lena Dunham said her resolution was to “kiss more gay men on the lips consensually.”