Several protesters staging a civil disobedience action were led away handcuffed by New York police outside the US mission to the UN. Activists were holding “Let Yemen Live” and “Stop Bombing Yemen” placards.

The UN protest formed part of coordinated protests at Saudi Arabian consulates in several US cities. The action was timed to coincide with Human Rights Day.

In New York, protesters were told to disperse by police outside the US mission to the UN Monday, before several of them are seen on Facebook live being handcuffed in zip ties and taken into custody.

“I’m here because I am very concerned by the influence of the Saudi, Israeli, US military intelligence establishment on the entire US war machine, the so-called war on terror,” said Sander Hicks before he was led away in a Facebook Live post.

The NYPD could not confirm how many people were taken into custody. The activists could be handed desk summons’ or could be arrested.

Hicks said he was joined members from Veterans for Peace, the Catholic Workers, Grannies for Peace, and Refuse Fascism and Code Pink who later marched to the Saudi Arabia Consulate at the UN.

Activists were demonstrating against the US supported Saudi-led war on Yemen, which has induced one of the largest man-made humanitarian crisis.

The Saudi-led war on Yemen began in March 2015, as an effort to restore ousted President Abed Rabbo Mansour Hadi. Unable to defeat the loyalists of former president Ali Abdullah Saleh, aided by Houthi rebels which the Saudis claimed are backed by Iran, the coalition imposed a blockade on Yemen. 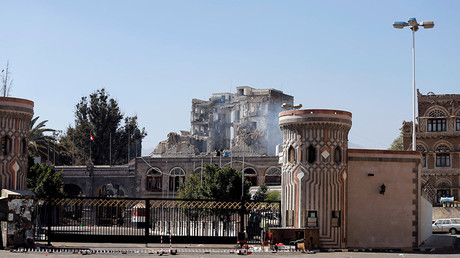 The war and blockade have plunged Yemen into a major humanitarian disaster, leaving 20 million people in dire need of aid. More than 11,000 civilians are estimated to have been killed in the conflict.

Trump’s call follows a UN appeal for a “humanitarian” stop to the airstrikes and fighting in Yemen, to allow for the delivery of aid to civilians trapped in the capital Sana’a.

Saleh was killed Monday after he tried to break off the alliance with the Houthis and negotiate with the Saudi-led alliance. US-backed Saudi coalition forces renewed their attacks on Sana’a in order to back up Saleh’s supporters. Violent clashes in the capital have resulted in at least 125 deaths this week, AP reported citing aid groups.