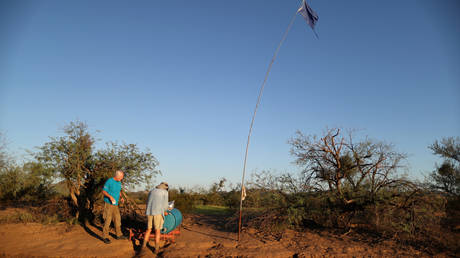 A US federal judge has found four volunteers with a local aid group guilty of petty offenses after they entered a wildlife refuge without a permit to leave food and water for illegal migrants seeking to cross the US-Mexico border.

The case dates back to August 2017, when four women with the ‘No More Deaths’ NGO drove into the Cabeza Prieta National Wildlife Refuge in southwestern Arizona and left behind one-gallon water jugs and cans of beans. One of the activists, Natalie Hoffman, who was behind the wheel, was charged for having a vehicle inside the park, as well as entering without a permit and abandoning personal property there.

Her three co-defendants were found guilty of two similar charges. “The Defendants did not get an access permit, they did not remain on the designated roads, and they left water, food, and crates in the Refuge,” US Magistrate Judge Bernardo Velasco wrote in his decision on Friday. That, according to the ruling, violates the law and “erodes the national decision to maintain the Refuge in its pristine nature.”

The judge also slammed the No More Deaths group for failing to inform its activists about the real consequences of their actions. Each of the women may now face up to six months in prison and a $500 fine, although the date of their sentencing has not been set.

The court’s decision drew an angry rebuke from the aid group. “This verdict challenges not only No More Deaths volunteers, but people of conscience throughout the country,” Catherine Gaffney, a longtime volunteer with No More Deaths, said in a statement published on its website.

“If giving water to someone dying of thirst is illegal, what humanity is left in the law of this country?”

The volunteers admitted they willingly chose not to obtain the entry permit as it would have prohibited them from leaving anything in the refuge. “I was there to leave water,” Hoffman said during the trial.


Another volunteer described their actions as “sacred,” while comparing the refuge to a “graveyard.” The area is indeed notorious for the number of human remains found there each year, according to local media.

The Friday verdict comes amid US President Donald Trump’s ongoing efforts to tighten immigration and border enforcement, which has already resulted in a tense standoff between the White House and Democrats in Congress.

The US government has been shut down for four weeks due to disagreement over Trump’s $5.6 billion Mexican border wall project.

Activists seeking to provide aid to migrants have been convicted before. In 2009, a No More Deaths volunteer was found guilty of littering after leaving water jugs at the Buenos Aires National Wildlife Refuge, Arizona. However, charges such as these against aid groups and volunteers have, for the most part, been dismissed. Five more activists are still awaiting trials for similar activities in Cabeza Prieta.