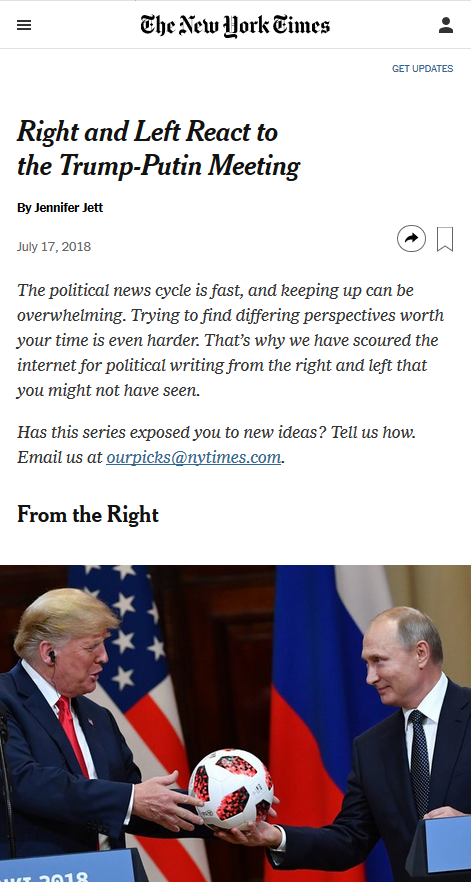 The New York Times, despite its above-the-fray self-image, is one of most overtly ideological institutions on earth. Its primary editorial purpose—as laid out by its own opinion page editor earlier this year (James Bennett: “We are in favor of capitalism”—FAIR.org, 3/1/18)—is to defend the unimpeachable virtues of capitalism. As such, whoever the Times holds up as “the left”—in its sourcing and in its hiring practices (FAIR.org, 4/20/17)—has to first and foremost accept the primacy of the market and the broader virtue of a US-run global order that promotes this particular ideology.

Even so, when Times reporter Jennifer Jett (7/17/18) wanted to recap reactions—“from the right and left”—to Donald Trump’s recent summit with Russian President Vladimir Putin, the choice of pundits she turned to to represent “the left” was exceedingly bizarre. Somehow Alina Polyakova, a conventional wisdom-echoing research director at the NATO-aligned and -funded think tank Atlantic Council,  and Fred Kaplan, a champion of the Iraq War at Slate, were offered by Jett as “the left.”

The third member of this three-person list was Atlantic staff writer James Fallows, the one person included whom you could argue was some species of leftist (though the Radical Middle Newsletter cites him as an example of a “great radical-centrist journalist”). While The Atlantic is generally a center-right publication, Fallows is at least a skeptic of US military power, but by no means a consistent anti-imperialist.

Polyakova has made a name for herself in the emerging cottage industry of Russia experts who are willing to toe the US NatSec consensus line that Russia is the alpha and omega of all bad things in the US, Europe and the Levant. Kaplan, for his part, is simply a dull, reliable partisan. Polyakova and Kaplan pushing the Sinister Russia Puppeteer narrative is anything but unexpected, but one has to wonder: In what universe are they “the left”? They have no history in left-wing activism, politics, academia or media. They are, for better or worse, boilerplate centrist hawks, toeing the exact line 99 percent of our media do.

By contrast, the “right” was represented in the Times feature by pundits from bona fide outlets of the conservative movement: the National Review, American Conservative, Weekly Standard, The Federalist. 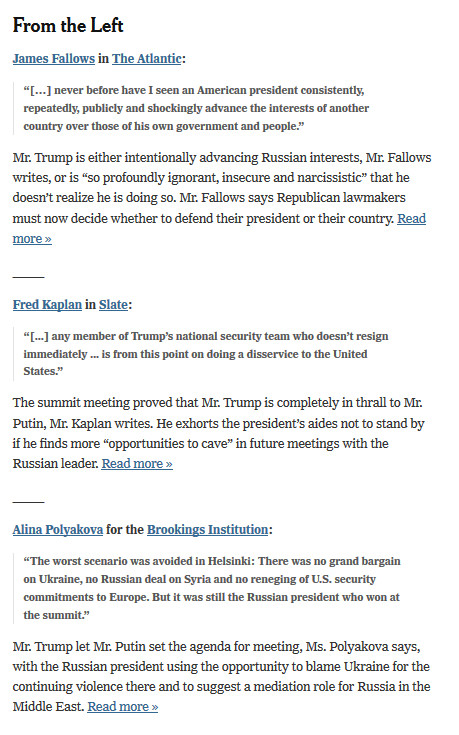 The New York Times‘ strange vision of who “the left” is.

Fallows, whom one could argue represents a meaningful segment of “the left,” echoes the MSNBC line that Trump, when he refuses to reject Putin’s denials of US intelligence charges that Russia intervened on Trump’s behalf in the 2016 election, is “shockingly advanc[ing] the interests of another country over those of his own government and people.” It would be disingenuous to suggest there wasn’t a sizable segment of the American left who believe this to be true—and believe it to be a genuine threat to working-class interests—but this belief is by no means uniform.

Lots of professional opinion-havers on the left, from Noam Chomsky to Matt Taibbi to Katrina vanden Heuvel, are skeptical of the whole premise, and feel trafficking in the prevailing Manchurian Candidate fear-mongering fuels Cold War forces, avoids broader issues of inequality and establishment failures, and could lead to escalation in Syria, Ukraine and possibly even a nuclear war. None of these voices, of course, are permitted to be heard from in the New York Times, whose opinion pages were united in breathless indignation that the US intelligence community was having its good name dragged through the mud.

The only non–“sky is falling” take permitted, per usual, is from the revanchist right wing—in this instance, the American Conservative’s Pat Buchanan. As we’ve noted in the past, anti-interventionist positions are almost always represented by libertarian or nativist voices; this way publications can tell themselves they didn’t uniformly follow the official pro-military line, without allowing actual anti-imperialist or leftist voices that may muddy the waters by making fundamental critiques of our system, rather than the white supremacy–flattering, pseudo-opposition offered up by antisemites like Buchanan.

Given that milquetoast centrists were standing in for the left, one might wonder whom the Times held up to represent the “center”: none other than hotel room doormat USA Today and arch-neoconservative Iraq War–promoter and child-rape apologist Anne Applebaum. The voices of the American center, indeed.

It’s a small but telling example. The Times’ primary charge is to firmly establish the parameters of debate. To do this it must offer up the most banal, NATO-echoing conventional wisdom as representing the acceptable left wing of this debate, and, as it does with its opinion page (FAIR.org, 6/20/17), only permit “fringe” positions so long as they come from the far right and never really offend traditional centers of power.

Please tell the New York Times to use actual voices from the left to represent “left” opinion—on the Helsinki summit or anything else.