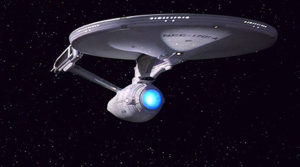 I grew up with the idea that leaving Earth was inevitable. The Space Age had arrived and the sky was no limit. Per ardua ad astra was no longer a metaphor; it would happen, it was happening. Invisible radiation traveled through the air every afternoon to bring me indelible images of humans in space, benignly, bravely venturing out into the numinous beauty of the galaxy strung with stars, enticingly intercalated with exotic life. A chorus of ethereal voices accompanied their stalwart ship each time, as it boldly went where no man [sic] had gone before.

What it carried with it were clean, comfortably-appointed living spaces where slim, attractive people sported glittery, form-fitting synthetics and teased and pomaded hair that was preternaturally perfect. Mutual respect, affection and humor were their mainstays. There was racial harmony – for humans had united, at last! (Often against other species, but only if they threatened us first. Otherwise, we sought to befriend them.) Artificial intelligences informed, protected and consoled us, but knew their place, like good housemaids. If they overstepped, we pulled the plug. Our marvelous cultural diversity was still intact no matter how deracinated our existence had become, speeding along in a vacuum, light-years from home among the stretched-out stars.

I was so happy in that…