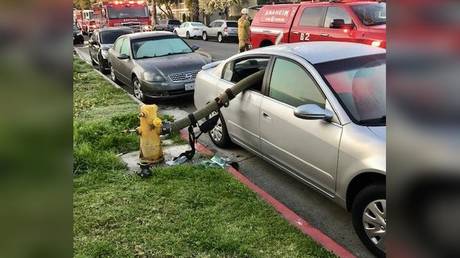 Anaheim Fire & Rescue posted pictures Tuesday showing the dire, and expensive, consequences of parking beside a fire hydrant for any unwitting and careless driver foolish enough to chance their arm.

Both rear windows of the Nissan sedan at Tuesday’s residential fire were smashed in to make room for the fire hose to fit through so emergency responders could do their job battling a blaze across the street.

“There is a reason the curbs are RED people,” Anaheim PD tweeted in solidarity with their firefighting colleagues.

APD assisted our partners from @AnaheimFire on a working residential structure fire this morning in the 1100 blk of N. West St. they had to run a hose line thru a car’s windows because it was parked in front of the hydrant. There is a reason the curbs are RED people https://t.co/vSXmtBjNXW

The standard fine for parking in front of a fire hydrant is $80. Replacing the broken windows would depend entirely on the type of car, but would definitely add insult to injury.

Some Twitter users questioned why the fire department needed to break the windows, though many applauded them for a job well done.

Would you rather replace 2 windows are the $3000 plus dollars of body damage to the roof from a powerful and heavy hose crushing the top of your car. Frankly windows are cheaper to replace. Good call guys. pic.twitter.com/VFMNirZviX

The fire hose reportedly doesn’t fit underneath vehicles, and the potential damage caused to either the vehicle or the hose itself by placing it on top would be more than the cost of the broken windows.