Donald Trump was right when he said that the North American Free Trade Agreement (NAFTA) has been a disaster for the United States and promised to renegotiate it when he became president. However, the renegotiated NAFTA-2 is worse than the original NAFTA and should be rejected.

Popular Resistance is in its end-of-the-year fundraising drive.
Click here to make a tax-deductible donation today.

On December 1, NAFTA-2 was signed by President Trump, Prime Minister Justin Trudeau of Canada, and Mexican President Enrique Peña Nietos. This started the process of approval by the legislatures of each country.

Our movement for trade that puts people and planet first now has two synergistic opportunities: We can stop NAFTA II and replace corporate trade with a new model that raises working conditions and protects the environment. 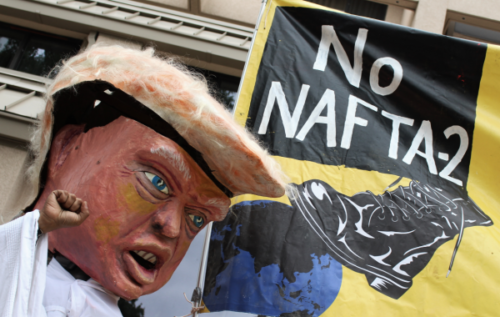 No NAFTA -2 from Popular Resistance

When NAFTA became law on January 1, 1994, it began a new era of trade – written by and for transnational corporations at the expense of people and planet. President George H.W. Bush failed twice to pass NAFTA. During Bush’s re-election campaign, independent Ross Perot described NAFTA as the “giant sucking sound” that would undermine the US economy.

President Clinton was able to get it through Congress. The Los Angeles Times described that vote as “a painfully divided House of Representatives” voting a 234-200…