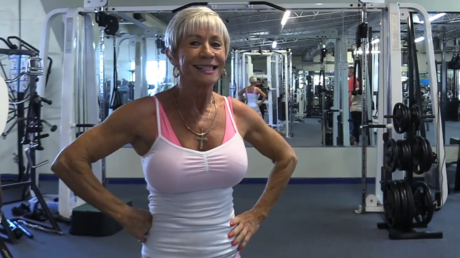 These days most 75-year-olds are settling into retirement and putting their feet up, not honing their perfectly toned bodybuilding frame and beating world records for pull-ups. One septuagenarian is seriously bucking that trend.

Iris Davis, an international bodybuilding champion and personal trainer from Georgia, became a world record holder for performing 21 pull-ups in a row on her 74th birthday.

Davis has racked up 11 bodybuilding titles over her 50-year career – a career that started after the depressed Irish-born fitness guru uprooted her life to move to the US following the death of her first child and husband.

Female bodybuilding is more popular than ever today, but Iris considers herself a trailblazer in the scene, given that during the 1960s most gyms in the US were still barring women from membership.

Ruptly caught up with the 75-year-old trainer as she led a workout class at the Beach Bodies Health & Fitness centre near Melbourne, Florida on Friday. The pensioner showed she’s far from retirement as she performed several impressive workout techniques and flexed her award-winning muscles.


“It’s never too late, I have women who start training with me when at age 70. Within two years they’re all bulked up and beautiful and fit and toned and strong,” said Davis, in a message to inspire others her age to get back in the gym. “I tell people if I can do it, you can do it.”