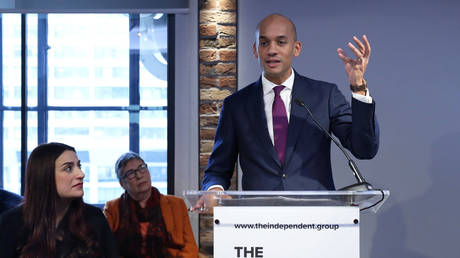 A group of Labour MPs have announced that they are quitting the party and will sit as Independent MPs in the house of commons, hitting out at leader Jeremy Corbyn for presiding over an “institutionally anti-Semitic” party.

Announcing their resignations in Westminster, Luciana Berger, the MP for Liverpool Wavertree took to the stage first, to claim that she could not stay in the party any more because it had become “institutionally anti-Semitic.”

Chuka Umunna, MP for Streatham, a prominent ‘People’s Vote’ advocate appealed to all MPs, not just Labour, to join their group, as the current parties are part of the problem, not the solution.

He argued that “It is time we dumped this country’s old fashioned politics.” Umunna claimed the UK needed a political party “fit for the hear and now” and the “first step in leaving the tribal politics behind.”

Chris Leslie, MP for Nottingham East, insisted that it had not been an easy decision to make but that he believed that the Labour Party had been hijacked by the “machine politics of the hard left.”

Angela Smith, MP for Penistone and Stocksbridge, revealed that it had been a very painful decision to resign her membership but suggested the current Labour party were guilty of patronizing the electorate.

Gavin Shuker, MP for Luton South, in perhaps a dig at Corbyn’s foreign policy, says the new independent group “does not think every problem in the world has been created by the west.”

Ann Coffey, MP for Stockport, says the Labour party is no longer a broad church. “The current leadership has been very successful at changing the party beyond recognition,” she says. “Loyalty cannot be an end in itself.”

Mike Gapes, MP for Ilford South, says he is sickened by anti-Semitism in the party and angry that the Labour leadership is facilitating Brexit. He also highlighted Corbyn’s position on a number of Foreign countries.


“Jeremy Corbyn and those around him are on the wrong side in so many international issues, from Russia, to Syria to Venezuela,” Gapes claimed.

Labour party leader Jeremy Corbyn has reacted to the news by saying he is saddened by the decision of MPs to leave the party.

In a statement Corbyn said: “I am disappointed that these MPs have felt unable to continue to work together for the Labour policies that inspired millions at the last election and saw us increase our vote by the largest share since 1945.”