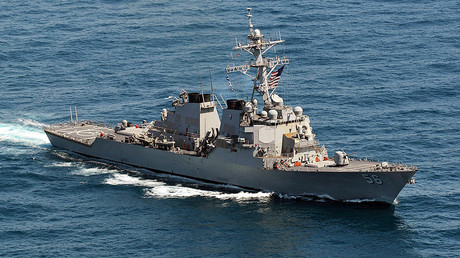 At least 5 sailors have been injured and 10 are missing after a US guided-missile destroyer, the USS John S. McCain, “sustained damage” in collision with a merchant vessel while on a routine port visit to Singapore, the US Navy has said.

“Initial reports indicate John S. McCain sustained damage to her port side aft,” the US Navy said, noting that the incident happened while “the ship was transiting to a routine port visit in Singapore.”

“The extent of damage and personnel injuries is being determined,” the statement said. The condition of the wounded is yet unknown, the navy said in a follow-up statement.

The US warship reportedly hit AN Alnic MC vessel. The damage to the merchant vessel is also yet unknown.

Our first priority is determining the safety of the ship and crew. As more information is learned, we will share it. https://t.co/E7j7CvKE2b

Although the US warship is sailing on its own power and heading to port, the navy announced that a search-and-rescue mission was under way in coordination with local authorities.

Tug boats, coast guard and Singapore navy vessels and helicopters are all involved in the rescue efforts, in addition to MV-22s and SH-60s aircraft from the USS America.

Admiral John Michael Richardson, who currently serves as the 31st Chief of Naval Operations, said the Navy’s top priority was “determining the safety of the ship and crew,” promising to share more details of the incident when it becomes available.

Meanwhile, Senator John Sidney McCain III, after whose father and grandfather – both US admirals – the vessel was named, tweeted words of support to America’s sailors.

Cindy & I are keeping America’s sailors aboard the USS John S McCain in our prayers tonight – appreciate the work of search & rescue crews https://t.co/jzk9giXbfg

The merchant vessel Alnic is 182 meters (600 feet) long and has a dead weight of 50,760 tons, the Washington Post reported. The ship has a 30,000+ ton oil/chemical tank and was built in 2007. The Alnic sails under the Liberian flag and is reportedly operated by Stealth Maritime Corporation S.A.

The USS McCain is a 505-foot-long Arleigh Burke-class destroyer based at the 7th Fleet’s home port in Yokosuka, Japan, and was commissioned in 1994. Earlier this month, it sailed within a 12-mile range of Mischief Reef in the disputed Spratly islands chain in the South China Sea. Donald Trump also referred to the warship as a show of force during the latest verbal exchange amid escalating tensions with North Korea.

The incident marks the second US warship collision with a trade vessel this summer. On 17 June 2017, seven American sailors were killed after the USS Fitzgerald destroyer collided with a Philippine-flagged container ship some 56 nautical miles southwest of Yokosuka, Japan.

In May this year, a guided-missile cruiser, the USS Lake Champlain crashed into a 60-foot South Korean fishing boat. No one was injured during the open sea incident.

Roughly a year ago, on August 19, a nuclear ballistic-missile submarine, the USS Louisiana, collided with a military sealift command support vessel, the USNS Eagleview off the coast of Washington State. No one was injured in the collision.