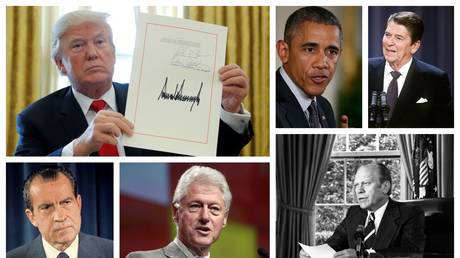 By issuing his first veto, Donald Trump has emulated past presidents, many of whom exercised their legislation-blocking powers under dubious pretexts. In fact, US history is rife with controversial vetoes.

Trump sparked the ire of Congress on Friday after he announced that he would not sign a resolution which would overturn his declared ‘state of emergency’ over the US-Mexico border. The House is expected to vote on March 26 to override the veto, although it’s unlikely that lawmakers can muster the necessary two-thirds majority in both chambers.


While Speaker Nancy Pelosi has accused Republican members of Congress of engaging in “partisan hypocrisy,” the unflattering truth is that presidential administrations from both major parties have used the veto power to block – and preserve – deeply divisive laws and dictates.

It may be hard for most American parents to fathom, but they were once just a signature away from being entitled to universal, federally-subsidized child care. Congress passed the Comprehensive Child Development Bill in 1971, but President Richard Nixon axed the law, tapping into Cold War hysteria by arguing that a national day care system would create a “communal approach to child-rearing.”

In 1974, Nixon’s successor, Gerald Ford, issued one of history’s most ironic presidential vetoes. Ford, who assumed office after Nixon resigned following the Watergate scandal, attempted to block a bill that would strengthen the Freedom of Information Act. Known as FOIA, the bill was first enacted in 1967 and designed to make it easier for citizens to obtain government records. Despite his government secrecy-preserving objections, Congress was able to override Ford’s veto, enshrining the upgraded FOIA into law.

Washington’s unapologetic fondness for imposing sanctions on countries deemed insubordinate has caused rifts in the international community. But there was a time when the United States was far less trigger-happy when it came to reprimanding foreign nations. In 1986, Ronald Reagan vetoed the Comprehensive Anti-Apartheid Act, which would have placed sanctions on South Africa’s pro-apartheid government. Reagan claimed that the legislation would amount to “economic warfare” – an argument which apparently didn’t convince lawmakers. Congress overrode his veto and imposed the sanctions.

Also on rt.com
‘Should’ve listened to me’: Trump says Brexit debacle could’ve been avoided if May heeded his advice

The ceaseless debate over abortion reached a fever pitch in 1996, when President Bill Clinton struck down a bill that would have prohibited doctors from performing “partial-birth abortion,” a type of late-term abortion. He defended his decision by arguing that such procedures could be life-saving for women with high-risk pregnancies. The veto, however, enraged conservatives and further aggravated the ‘pro-life’ vs ‘pro-choice’ battle.

5. Obama tries to bat away 9/11 lawsuits aimed at Saudis

President Barack Obama was behind one of the more curious vetoes in recent history. In 2016, the outgoing president vetoed a bill that would have allowed the families of 9/11 victims to sue the government of Saudi Arabia for complicity in the terrorist attacks on the Twin Towers and the Pentagon. Obama said the legislation could pose a threat to national security, but Democrats and Republicans in both the House and the Senate ignored his concerns and overturned his veto.