Pharmaceutical company Mylan has struck a deal with federal authorities to pay out $465 million in damages after allegedly overcharging the Medicaid program by millions of dollars for their EpiPen products.

On Thursday, the company and the Department of Justice said that subsidiaries Mylan Inc. and Mylan Specialty L.P. are going to make payments to settle allegations that the drug maker misclassified the Epi-Pen as a generic product, which, in turn, cut the amount of rebates owed to Medicaid. 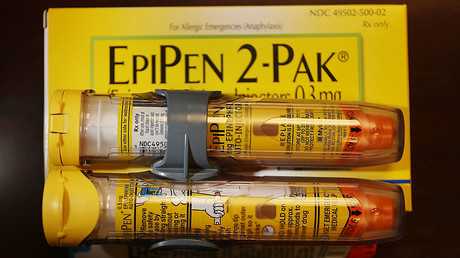 The settlement does not contain an admission or finding of wrongdoing, Mylan said, according to the Wall Street Journal.

The agreement with Mylan states that the company will reclassify the EpiPen as an innovator drug and will pay the rebate relevant to innovator products effective retroactively to April 1, 2017.

Mylan also agreed to an annual five-year independent review on its practices with the Medicaid drug-rebate program. In October, Mylan said it would record a pretax charge of around $465 million in its third quarter to cover the settlement charges.

In 2014, a company called Sanofi SA, which also sold a version of the drug contained in the EpiPen at the time, notified the US Attorney’s Office about Mylan’s practices. Then in 2016, the company filed a whistleblower lawsuit under the False Claims Act against the drug company. This resulted in a settlement of $38.7 million to Sanofi, Acting US Attorney William Weinreb’s office said, according to CNBC.

“Bringing closure to this matter is the right course of action for Mylan and our stakeholders to allow us to move forward,” Bresch said, according to CNBC.

The Medicaid drug rebate program allows pharmaceutical companies to pay a rebate to states for prescription drugs dispensed to patients on Medicaid. This was put in place in an effort to offset the cost of drugs.

The program requires higher rebates on brand-name drugs as opposed to generic ones, which tend to be cheaper due to competition.

Mylan has argued that the EpiPen, which delivers an emergency shot of epinephrine to counter allergic reactions, was classified as a generic drug before the company acquired the product in 2007.

But the US Attorney’s Office claims that Mylan continued to classify the EpiPen as a generic, while pricing and marketing it as a brand-name drug.

Last year, Mylan said a $465 million settlement had already been agreed upon. But lawmakers who cited a study estimating that the amount Mylan overcharged was higher objected. And the Department of Health and Human Services said in January it had not agreed to a settlement with the drug maker yet, the Wall Street Journal reported.

The HHS Office of the Inspector General said Medicaid paid $1.27 billion more for the EpiPen from 2006 to 2016 than it otherwise would have had the drug been classified as a brand-name product, according to CNBC.

Last year, federal health officials and Senators pointed out that Mylan had increased the price of the EpiPen drug 550 percent since its 2007 acquisition of the product. Now, Mylan sells a half price generic version of the drug.